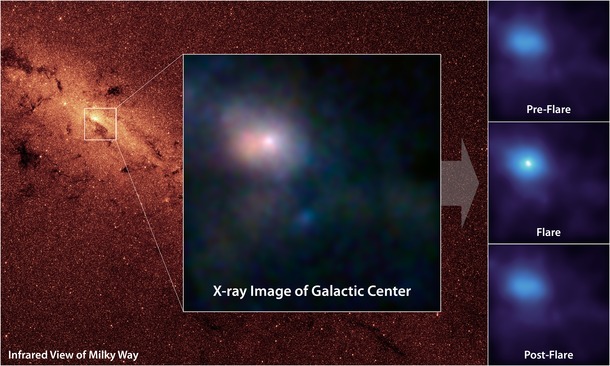 NuSTAR has captured these first, focused views of the supermassive black hole at the heart of our galaxy in high-energy X-ray light. The time series on the right shows a flare caught by NuSTAR when the black hole was consuming and heating matter to temperatures up to 180 million degrees Fahrenheit.

NuSTAR is undertaking several important studies of our own Milky Way Galaxy with unprecedented sensitivity. Whereas low-energy X-rays are subject to strong absorption from gas, the high energy X-rays observed by NuSTAR pass through undiminished. This, together with a more than 100 times greater sensitivity compared to previous telescopes in this energy range, means that NuSTAR is opening a new window on the the densest regions and sources in the Galaxy.

Mapping out the center of our Galaxy

NuSTAR is producing deep maps of the inner few hundred parsecs around the Galactic center. This region contains roughly 1% of the entire Galaxy's stellar mass, up to 10% of its most massive, young stars, and, at the very center, a supermassive black hole which has a mass four million times that of our Sun. The black hole, known as Sagittarius A* (or Sgr A*), is one of the most puzzling objects known. Despite its immense mass, Sgr A* is very faint. In fact, it is the most under-luminous supermassive black hole known. Much of our detailed knowledge of Sgr A* comes from indirect observations of stars orbiting around it. NuSTAR observations of Sgr A* flares, thought to result from instabilities in the flow of matter into the black hole, can test models of this inflow. NuSTAR is also addressing the nature of mysterious high-energy emission seen by the INTEGRAL satellite very near Sgr A*. NuSTAR observations of the Galactic Center region are discovering entirely new source populations and increasing our knowledge of objects in the center of our galaxy.