The NuSTAR (Nuclear Spectroscopic Telescope Array) mission has deployed the first orbiting telescopes to focus light in the high energy X-ray (3 - 79 keV) region of the electromagnetic spectrum. Our view of the universe in this spectral window has been limited because previous orbiting telescopes have not employed true focusing optics, but rather have used coded apertures that have intrinsically high backgrounds and limited sensitivity.

During a two-year primary mission phase, NuSTAR maped selected regions of the sky in order to: 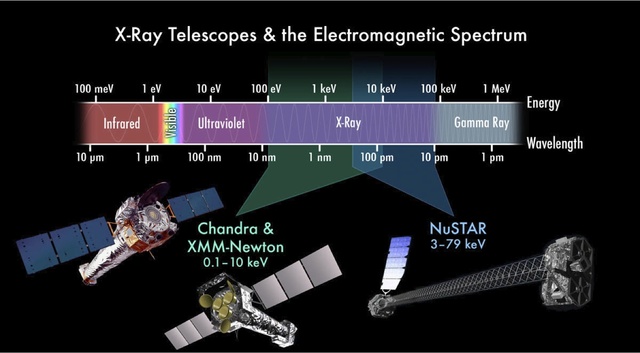 In addition to its core science program, NuSTAR offers opportunities for a broad range of science investigations, ranging from probing cosmic ray origins to studying the extreme physics around collapsed stars to mapping microflares on the surface of the Sun. NuSTAR also responds to targets of opportunity requests including observations of supernovae and gamma-ray bursts.

The NuSTAR instrument consists of two co-aligned grazing incidence telescopes with specially coated optics and newly developed detectors that extend sensitivity to higher energies as compared to previous missions such as Chandra and XMM. After launching into orbit on a small rocket, the NuSTAR telescope extended to achieve a 10-meter focal length. The observatory provides a combination of sensitivity, spatial, and spectral resolution factors of 10 to 100 improved over previous missions that have operated at these X-ray energies.