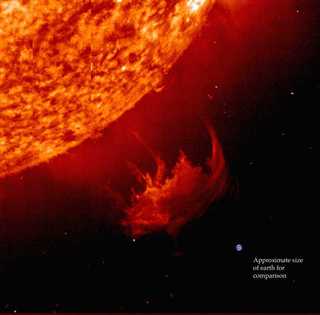 A prominence erupting from the Sun's surface in October 2003, observed with the international Solar and Heliospheric Observatory (SOHO). The Earth is shown to scale. Credit: JPL/NASA and ESA.

NuSTAR will provide unique and valuable high energy observations of the Sun and Solar corona. The corona is the very hot, low density outer atmosphere of the Sun, reaching temperatures of more than one million degrees and extending millions of kilometers into space. It is a very active region, with the regular appearance of large-scale loops, flares, prominences, and coronal mass ejections. Studying the corona, we get a close-up look at the particle acceleration processes similar to those that take place in supernova remnants, black hole jets, and high temperature astrophysical plasmas.

NuSTAR will be orders of magnitude more sensitive to Solar hard X-ray events than the Reuven Ramaty High Energy Solar Spectroscopic Imager (RHESSI), a NASA Small Explorer mission launched in February 2002 and the most sensitive high energy Solar X-ray mission prior to NuSTAR. Solar flares that are just barely detectable by RHESSI will nearly saturate NuSTAR. Thus, NuSTAR will open up the study of the very smallest flares: "nanoflares" in the active regions, or sunspots, and "network flares" all over the Sun's surface. These smallest, most numerous flares may play an important role in heating the Solar corona, which is one of the longstanding questions in heliophysics. In addition, NuSTAR should be able to study X-rays emitted by beams of high energy particles ejected from the Sun during flares and normally detectable only by their radio emissions.


Axion Decay
At the same time that NuSTAR makes fundamental Solar observations, we will also address a longstanding particle physics problem by searching for signatures of axions escaping from the Sun. The axion is a hypothetical elementary particle postulated in 1977 to resolve the charge-parity (CP) violation problem in quantum chromodynamics. Depending on their mass, axions could also potentially explain both the dominance of matter over antimatter in the early Universe as well as solve the dark matter problem of physical cosmology. Briefly explaining just the last of these problems, while only 4% of the total energy density of the Universe can be seen directly, 22% is thought to be composed of dark matter whose presence is inferred from its gravitational effects on visible matter, but is not detectable from direct emitted light. While numerous astrophysical observations imply the presence of dark matter, no candidate particle or particles have been observationally confirmed. Dark matter could be comprised of fundamental particles such as axions or supersymmetric particles, or could be more massive objects such as black holes or cold, failed stars (brown dwarfs). The remaining 74% of the Universe is thought to consist of a diffuse component permeating space which is referred to as dark energy.

Due to the Primakoff effect, the Sun is expected to be produce a copious flux of axions, should such particles exist. Depending on the properties of the axion particle, the strong magnetic field of the Solar corona will convert some of the axions into X-ray photons detectable by NuSTAR. For some regions of axion phase space, NuSTAR will have more sensitivity to this process than ground-based solar axion experiments or previous solar satellite missions. As shown above, NuSTAR detections of axion conversion X-rays would be concentrated at the core of the Sun and would be easily distinguished spatially, spectrally, and temporally from high energy Solar corona X-rays which will be concentrated on the Solar limbs.