Neutron stars are remnants  of stellar death so dense that they pack more than the mass of the Sun in a sphere the size of a small city. They are composed of nuclear matter produced by some types of supernovae, which occur when massive stars run out of fuel to power nuclear fusion reactions in their core and hence lose all their support against gravitational collapse. The pressure of the collapse is so great that it can be balanced only when the matter in the star is compressed to the point where neutrons and protons in atomic nuclei start pushing against each other. This is known as the neutron degeneracy pressure.

Neutron stars are observed in a variety of systems: as isolated objects emitting pulses of light towards us (pulsars) and giant flares  or as binary systems with other stars, white dwarfs or even other neutron stars. All of these systems produce copious hard X-ray emission which tells us details about the masses, radii, magnetic fields and their interaction with their companions. 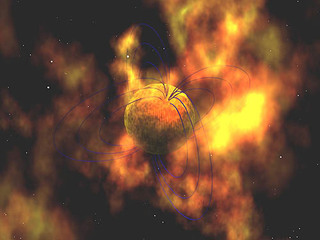 The physics of magnetars is still poorly understood, as is their origin, and over the past decade they have provided astronomers with many surprises. Indeed, one of the unexpected discoveries made by the INTEGRAL satellite is that magnetars are very luminous sources in the hard X-ray band. The origin of this high energy emission is unknown, although several models have been proposed. NuSTAR is performing a comprehensive high-energy study of magnetars, first by monitoring bright sources in the soft and hard X-ray ranges to see if the respective emission mechanisms are correlated, as is predicted in some models. Second, NuSTAR is measuring precise hard X-ray spectra for practically all known magnetars. If we are lucky and there is a major magnetar outburst during NuSTAR's lifetime, we will have the opportunity to study magnetar bursts, and perhaps elucidate the nature of mysterious spectral features reported in some magnetar bursts by NASA's Rossi X-ray Timing Explorer, a possible uniquely direct signature of the high magnetic field. 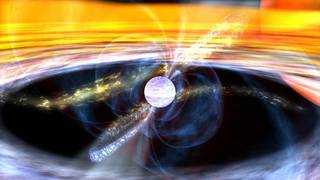 Some neutron stars are found in binary systems with other stars.  If the stars orbits are close enough, material from the larger donor star may accrete onto the neutron star.  This accretion process can produce large, variable outbursts of X-rays that NuSTAR and other satellites are observing in order to understand the properties of the binary system.

In some neutron star binaries, quantum mechanical effects cause light at specific energies to scatter away from our line of sight.  This phenomenon, called “cyclotron resonance scattering,” produces dips in the X-ray spectrum.  By measuring the energies at which these dips occur, NuSTAR directly measures the strength of the magnetic field of these neutron stars and study the accretion process. 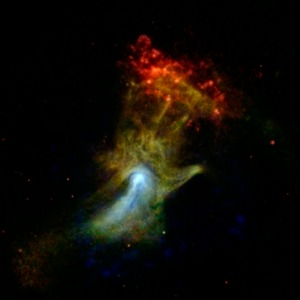 Finally, NuSTAR is also studying "Pulsar Wind Nebulae", generally spectacular nebular objects powered by the central young and rapidly rotating neutron star as it slows down. Such pulsars also somehow manages to produce a powerful, relativistic matter/anti-matter wind. This wind, upon interaction with the surrounding medium, sets up the dramatic nebula, whose features often include torii and jets. Understanding this wind and its interaction with its surroundings is a top priority in high-energy astrophysics, as it likely will help us understand the nature of astrophysical jets more generally. Thanks to its unprecedented angular resolution, NuSTAR has been able to study the morphology of several Pulsar Wind Nebulae for the first time in the hard X-ray band, as well as determine accurate nebular spectra, thereby constraining the properties of the relativistic wind. NuSTAR observations are also important for understanding the origin of very high energy gamma-ray emission discovered recently from many pulsar wind nebulae by the High Energy Stereoscopic System (HESS) telescope, among others.