NuSTAR launched into a low-Earth, near-equatorial orbit on a Pegasus XL rocket from the Kwajalein Atoll on June 13, 2012. The Pegasus launch vehicle, built by Orbital Sciences Corporation, relied on a unique air-launch system with the rocket released at approximately 40,000 feet from the "Stargazer" L-1011 aircraft. The rocket then free-fell in a horizontal position for five seconds before igniting its three-stage rocket motor. The Pegasus is one of the most flexible and reliable small launch vehicles. 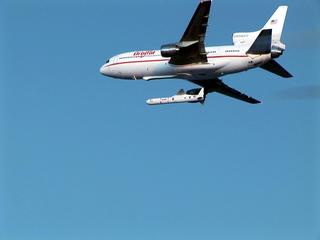 The NuSTAR launch was the fourth Pegasus launch conducted from the Kwajalein Atoll (8deg43min N, 167deg44min E). Kwajalein is the world's largest coral atoll, with a total landmass of 2.4 square miles split between 97 islets surrounding a 324 square mile lagoon. Kwajalein sits at the middle of the Ralik (sunset) Chain of the Marshall Islands, which lie midway between Hawaii and Australia, approximately 2000 nautical miles from each. As of 1986, the Republic of the Marshall Islands is independent, but maintains strong ties with the United States and hosts the Ronald Reagan Ballistic Missile Defense Test Site on Kwajalein Atoll. 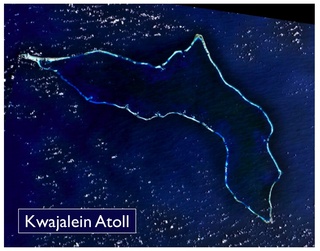 The Pegasus launch from Kwajalein positioned NuSTAR in a low-Earth equatorial orbit at an altitude of approximately 600 km and an inclination of 6 degrees. An equatorial orbit is particularly important for NuSTAR as it minimizes exposure to the South Atlantic Anomaly (SAA), the region centered above the southern Atlantic Ocean where the Earth's inner Van Allen belt makes its closest approach to the Earth's surface. Satellites at altitudes of a few hundred kilometers and in orbits inclined relative to the equator experience intense particle radiation during passages through the SAA. This is particularly problematic for high energy X-ray telescopes due to the high level of radioactive background thus produced in the detectors. This background will produce signals that mimic the cosmic X-ray emission that NuSTAR is now detecting.