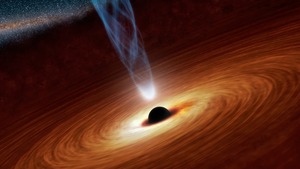 Black holes, tears in the fabric of space-time from which no light can escape, are among the most exotic objects in the Universe. Many black holes form naturally through stellar evolution, as remnants left over by the collapse of massive stars. We also see super-massive black holes – millions to a billion times our Sun’s mass – that grow in the hearts of galaxies over cosmic time by ‘swallowing’ surrounding dust and gas, entire stars, and even other black holes. One of NuSTAR’s primary aims is to find black holes, both within our Milky Way Galaxy and in other galaxies, to study how they grow, how the in-falling matter radiates, and understand their role as both as the fossil remnants of stars and the building blocks of galaxies through their influence on the environments in which they reside.

NuSTAR is also examining the fundamental properties of the black holes themselves. Remarkably, despite their exotic nature and the mystique surrounding them, astrophysical black holes can be fully characterised by two key properties: their mass and their angular momentum (or ‘spin’). The latter is particularly challenging to measure, only having an observable influence very close to the black hole. However, the infalling material can be used to probe these properties, and in turn shed new light on the process of forming a black hole. The unprecedented hard X-ray sensitivity and the broad, continuous bandpass provided by NuSTAR are ideally suited to making a substantial contribution to the measurement of these fundamental black hole properties, and work in this field is already underway.