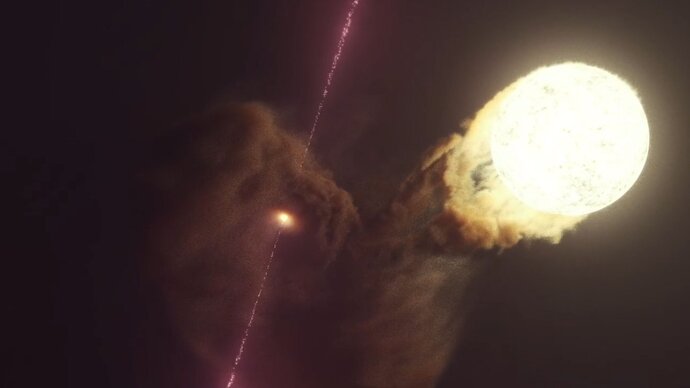 This illustration shows SS 433, a black hole or neutron star, as it pulls material away from its companion star. The stellar material forms a disk around SS 433, and some of the material is ejected into space in the form of two thin jets (pink) traveling in opposite directions away from SS 433. Credit: DESY/Science Communication Lab

It’s hard to miss a flashlight beam pointed straight at you. But that beam viewed from the side appears significantly dimmer. The same holds true for some cosmic objects: Like a flashlight, they radiate primarily in one direction, and they look dramatically different depending on whether the beam points away from Earth (and nearby space telescopes) or straight at it.

New data from NASA’s NuSTAR space observatory indicates that this phenomenon holds true for some of the most prominent X-ray emitters in the local universe: ultraluminous X-ray sources, or ULXs. Most cosmic objects, including stars, radiate little X-ray light, particularly in the high-energy range seen by NuSTAR. ULXs, by contrast, are like X-ray lighthouses cutting through the darkness. To be considered a ULX, a source must have an X-ray luminosity that is about a million times brighter than the total light output of the Sun (at all wavelengths). ULXs are so bright, they can be seen millions of light-years away, in other galaxies.

The new study shows that the object known as SS 433, located in the Milky Way galaxy and only about 20,000 light-years from Earth, is a ULX, even though it appears to be about 1,000 times dimmer than the minimum threshold to be considered one.

This faintness is a trick of perspective, according to the study: The high-energy X-rays from SS 433 are initially confined within two cones of gas extending outward from opposite sides of the central object. These cones are similar to a mirrored bowl that surrounds a flashlight bulb: They corral the X-ray light from SS 433 into a narrow beam, until it escapes and is detected by NuSTAR. But because the cones are not pointing directly at Earth, NuSTAR can’t see the object’s full brightness.

This animation illustrates how SS 433 -- which contains a bright light source surrounded by two bowl-shaped structures -- tilts back and forth in its orbit. As with a flashlight, the light of SS 433 appears much dimmer when viewed from the side. Credit: NASA/JPL-Caltech

“We’ve long suspected that some ULXs emit light in narrow columns, rather than in every direction like a bare lightbulb,” said Matt Middleton, a professor of astrophysics at the University of Southampton in the United Kingdom and the study’s lead author. “In our study, we confirm this hypothesis by showing that SS 433 would qualify as a ULX to a face-on observer.”

If a ULX relatively close to Earth can hide its true brightness because of how it is oriented, then there are likely more ULXs – particularly in other galaxies – disguised in a similar way. That means the total ULX population should be far larger than scientists currently observe.

About 500 ULXs have been found in other galaxies, and their distance from Earth means it’s often nearly impossible to tell what type of object generates the X-ray emission. The X-rays likely come from a large amount of gas being heated to extreme temperatures as it is pulled in by the gravity of a very dense object. That object could be either a neutron star (the remains of a collapsed star) or a small black hole, one that is no more than about 30 times the mass of our Sun. The gas forms a disk around the object, like water circling a drain. Friction in the disk drives up the temperature, causing it to radiate, sometimes growing so hot that the system erupts with X-rays. The faster the material falls onto the central object, the brighter the X-rays.

Astronomers suspect that the object at the heart of SS 433 is a black hole about 10 times the mass of our Sun. What’s known for sure is that it is cannibalizing a large nearby star, its gravity siphoning away material at a rapid rate: In a single year SS 433 steals the equivalent of about 30 times the mass of Earth from its neighbor, which makes it the greediest black hole or neutron star known in our galaxy.

“It’s been known for a long time that this thing is eating at a phenomenal rate,” said Middleton. “This is what sets ULXs apart from other objects, and it’s likely the root cause of the copious amounts of X-rays we see from them.”

The object in SS 433 has eyes bigger than its stomach: It’s stealing more material than it can consume. Some of the excess material gets blown off the disk and forms two hemispheres on opposite sides of the disk. Within each one is a cone-shaped void that opens up into space. These are the cones that corral the high-energy X-ray light into a beam. Anyone looking straight down one of the cones would see an obvious ULX. Though composed only of gas, the cones are so thick and massive that they act like lead paneling in an X-ray screening room and block X-rays from passing through them out to the side.

The cosmic object SS 433 contains a bright source of X-ray light surrounded by two hemispheres of hot gas. The gas corrals the light into beams pointing in opposite directions away from the source. SS 433 tilts periodically, causing one X-ray beam to point toward Earth. Credit: NASA/JPL-Caltech

Scientists have suspected that some ULXs might be hidden from view for this reason. SS 433 provided a unique chance to test this idea because, like a top, it wobbles on its axis – a process astronomers call precession.

Most of the time, both of SS 433’s cones point well away from Earth. But because of the way SS 433 precesses, one cone periodically tilts slightly toward Earth, so scientists can see a little bit of the X-ray light coming out of the top of the cone. In the new study, the scientists looked at how the X-rays seen by NuSTAR change as SS 433 moves. They show that if the cone continued to tilt toward Earth so that scientists could peer straight down it, they would see enough X-ray light to officially call SS 433 a ULX.

Black holes that feed at extreme rates have shaped the history of our universe. Supermassive black holes, which are millions to billions of times the mass of the Sun, can profoundly affect their host galaxy when they feed. Early in the universe’s history, some of these massive black holes may have fed as fast as SS 433, releasing huge amounts of radiation that reshaped local environments. Outflows (like the cones in SS 433) redistributed matter that could eventually form stars and other objects.

But because these quickly consuming behemoths reside in incredibly distant galaxies (the one at the heart of the Milky Way isn’t currently eating much), they remain difficult to study. With SS 433, scientists have found a miniature example of this process, much closer to home and much easier to study, and NuSTAR has provided new insights into the activity occurring there. 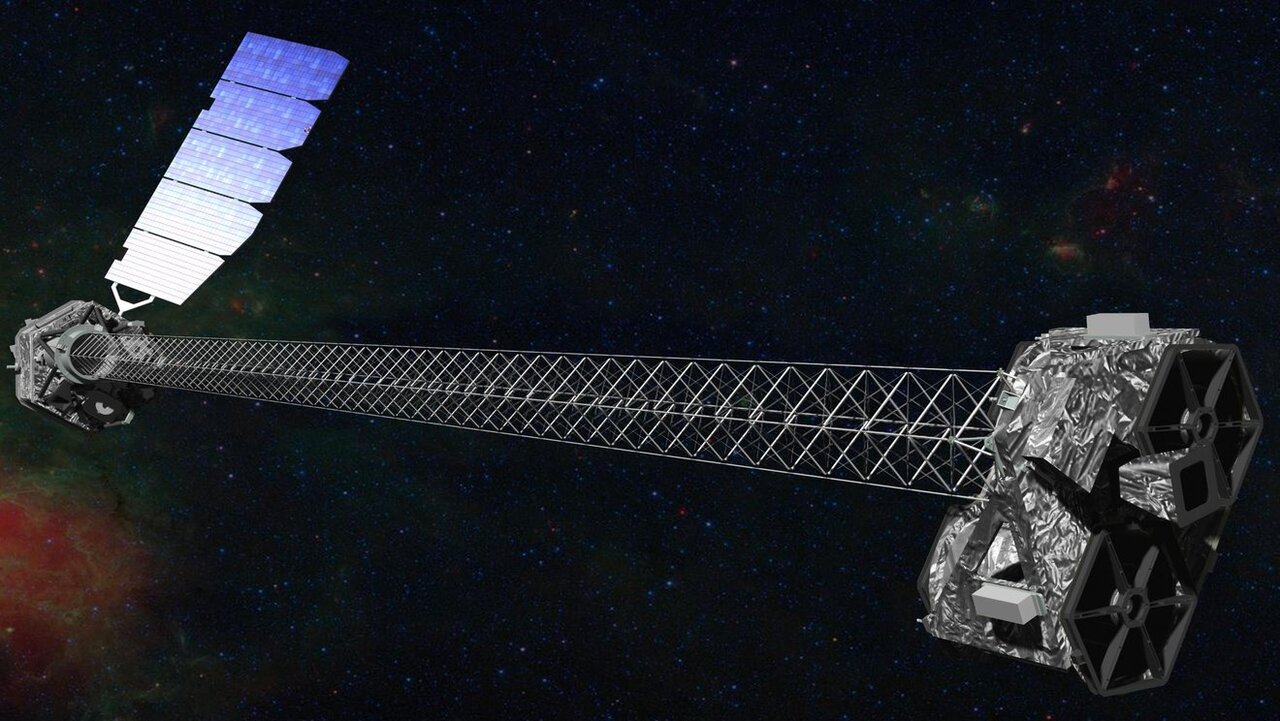 Illustration of the NuSTAR spacecraft, which has a 30-foot (10 meter) mast that separate the optics modules (right) from the detectors in the focal plane (left). This separation is necessary for the method used to detect X-rays. Credit: NASA/JPL-Caltech

“When we launched NuSTAR, I don’t think anyone expected that ULXs would be such a rich area of research for us,” said Fiona Harrison, principal investigator for NuSTAR and a professor of physics at Caltech in Pasadena, California. “But NuSTAR is unique in that it can see almost the whole range of X-ray wavelengths emitted by these objects, and that gives us insight into the extreme processes that must be driving them.”

NuSTAR is a Small Explorer mission led by Caltech and managed by NASA’s Jet Propulsion Laboratory, a division of Caltech, for the agency’s Science Mission Directorate in Washington. NuSTAR was developed in partnership with the Danish Technical University and the Italian Space Agency (ASI). The spacecraft was built by Orbital Sciences Corporation in Dulles, Virginia (now part of Northrop Grumman). NuSTAR’s mission operations center is at the University of California, Berkeley, and the official data archive is at NASA’s High Energy Astrophysics Science Archive Research Center. ASI provides the mission’s ground station and a mirror archive.

For more information about NuSTAR, visit: