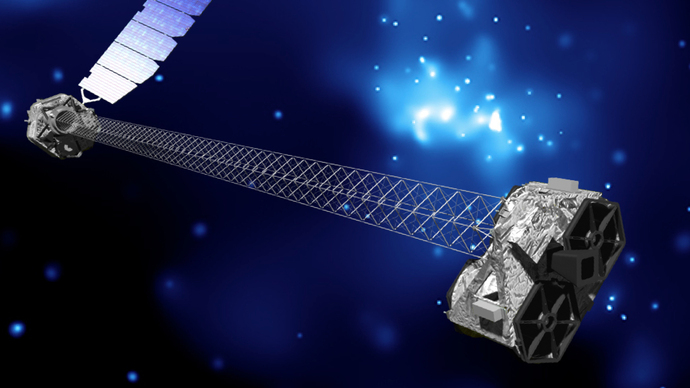 NuSTAR was launched with a lightweight stowed mast, which upon entry into to space, extended to its full length of 10 meters (33 feet).

Because of very shallow reflection angles, focusing X-ray telescopes require long focal lengths. Previous X-ray missions have accommodated these long focal lengths by launching fully deployed on large rockets. For example, the Chandra X-ray Observatory and the XMM-Newton satellite are two low-energy X-ray missions which launched in 1999. Both are 10 m (33 feet) long and weigh approximately 4000 kg (9000 lb). Chandra, built by NASA, launched on the Space Shuttle Columbia and XMM-Newton, built by the European Space Agency (ESA), launched on an Arianne 5 rocket. These are two of the largest lift capacity rockets currently available. 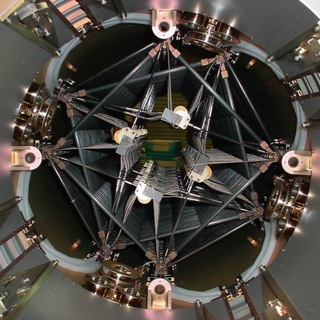 The NuSTAR mast in its stowed configuration.

Though the NuSTAR focal length of 10 meters is similar to that of Chandra and XMM-Newton, NuSTAR is a Small Explorer mission and had to fit in the low-cost Pegasus launch vehicle. Therefore, NuSTAR uses a unique deployable mast, or boom, that extended the optics after the payload was in orbit. This video (Link to the video showing deployment.) shown an artists conception of the mast deployment.

The articulated mast, built by ATK-Goleta, had significant flight heritage, and provided a stiff, stable, and reliable structure on which the optics were mounted. It is based on a design used to establish a 60-meter separation between the two antennae of the Shuttle Radar Topography Mission (SRTM) which flew on the Space Shuttle Endeavor in February 2000 and made high-resolution elevation (topographic) maps of most of our planet. 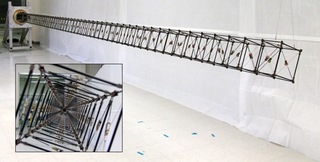 In order to assure that the NuSTAR optics were well-aligned with the detectors, an adjustment mechanism has been deployed on the top of the mast. This mechanism has been used to align the telescope and detectors. In order to measure deflections of the mast, NuSTAR uses a laser metrology system consisting of two lasers mounted on the optics bench that point at two light-sensing detectors on the detector end of the telescope. Measurements from the laser metrology system are then used to reconstruct the X-ray images, which would otherwise be blurred by the motion of the mast.