NuSTAR implements a conical approximation to the Wolter-I design and consists of 133 concentric mirror shells coated with Pt/SiC and W/Si multilayers. The NuSTAR optics have an overall length of 450 mm (1.5 feet), a maximum radius of 191 mm (7.5 inches) and a focal length of 10 m (33 feet). NuSTAR flies two of these units and each of them weight 38 kg (84 lbs). The optics operate in the energy range 3 - 79 keV.

The History of X-ray Optics 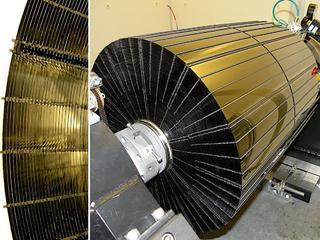 Right: NuSTAR optic on the assembly machine at Columbia University's Nevis Laboratory. Left: close up of individual layers separated by graphite spacers glued together by epoxy.

Astronomical focusing of visible light by the use of mirrors and lenses is an old art, dating back 400 years to Galileo's first observations with his homemade telescope in 1609. However, scientists only recently discovered how to do the same with X-rays. With the intention of constructing an X-ray microscope, the German scientist Hans Wolter in 1952 designed a reflective optic for focusing and imaging X-rays. His invention, called the Wolter Type I or Wolter-I design, has since been widely used for astrophysical purposes, despite its original invention as a microscope.

The Wolter-I mirror reflects X-rays twice, once off of an upper mirror section shaped as a parabola and a second time off a lower mirror section shaped as a hyperbola. The surfaces of the mirrors are nearly parallel to the incoming X-ray, allowing the X-ray to become reflected instead of absorbed. The shallow angles, however, result in a very small collection area per surface and, to overcome this, consecutive shells of varying size are nested tightly together to fill out the aperture.

The first focusing X-ray telescope in space was the Einstein Observatory (also known as HEAO 2), launched in 1978. Since then, there has been a steady stream of missions to improve and expand upon the mirror design of the Wolter-I telescope in an effort to make images sharper and more sensitive.

The NuSTAR X-ray optics are the latest refinement of the basic concept. But instead of a classical Wolter-I design, NuSTAR flies a conical approximation to the parabola and hyperbola, which slightly degrades the on-axis sharpness, in exchange for a more artifact free image when the source is coming in at an angle. In addition the NuSTAR optics are the first spaceborne mirrors coated with a graded layer of material, enhancing reflection.

The reflection of X-rays not only requires very small incidence angles and precise construction of the reflective surfaces. It also depends strongly on the material of the mirror and the surface smoothness of the mirror. Past missions, such as Chandra and XMM-Newton, used high density materials such as Platinum, Iridium and Gold as mirror coatings to achieve high reflectivity for low energy X-rays. However, the efficiency of those mirrors to reflect higher energy photons falls off rapidly. To overcome this threshold, the NuSTAR mirrors are coated with structures called "depth-graded multilayers".

Multilayers are thin coatings of two alternating materials deposited one on top of the other. A typical multilayer has 200 pairs of coatings. To achieve enhanced reflectivity, a high density contrast between the two materials is needed, and common high density materials are Tungsten (W) and Platinum (Pt), while common materials for the low density layers are Silicon (Si), Carbon (C), and Silicon Carbide (SiC). In this manner, the multilayer stack acts as a crystal lattice and constructive interference creates enhanced reflectivity, superior to a single mirror reflection at the high energies probed by NuSTAR.

NuSTAR flies Pt/SiC and W/Si multilayers, allowing the mirrors to reflect energies all the way up to 79 keV. Above this energy, the Platinum starts absorbing rather than reflecting X-rays. Previous focusing X-ray missions were only sensitive out to approximately 10 keV. NuSTAR therefore greatly expands the observational energy range for focusing telescopes to higher energies, limiting the highest energy to be 78.4 keV where the Pt K-edge abruptly decreases the reflective efficiency by orders of magnitude.

The NuSTAR team developed a novel approach to building these optics, focusing on a light-weight design. The mirror substrates are thin sheets of flexible glass, akin to laptop and cellular phone displays, which start out as flat sheets. At NASA's Goddard Space Flight Center in Greenbelt, Maryland, the glass was heated in an oven and slumped over precision polished cylindrical quartz mandrels to achieve the right curvature. The slumped mirror segments were then deposited with a multilayer coating at the DTU-Space at the Danish Technical University in Copenhagen.

The optics are built from the inside out, shell upon shell, spaced apart by graphite spacers and held together by nothing but epoxy. This precision assemblage was done at Columbia University's Nevis Laboratory outside New York City.