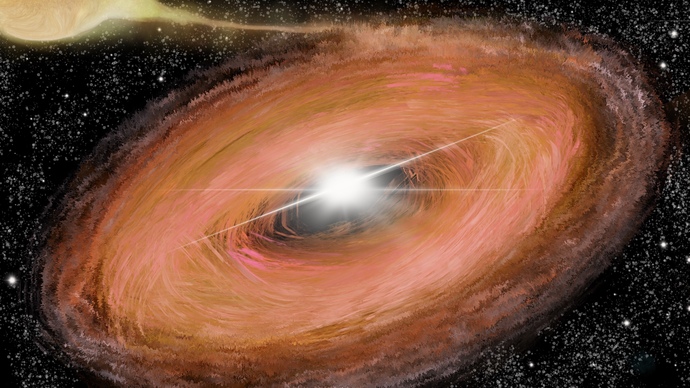 Artist’s (and co-author’s) conception of an accretion disk around an X-ray binary. [Original art by Dr. Renee Ludlam (Caltech)]

X-ray emitting binaries, consisting of a neutron star or a stellar-mass black hole being fed by a star, provide ideal laboratories for studying accretion physics. Low-mass X-ray binaries (LMXBs), where the stellar companion is roughly the mass of the Sun, are particularly valuable since they regularly alternate between periods of active accretion, known as “outbursts” that last weeks to months, and quiescent periods with little to no material falling onto the compact object.

van den Eijnden and collaborators recently presented X-ray observations by NASA’s NICER, Swift, and NuSTAR observatories that monitor the decay of one such outburst, by the Galactic neutron star X-ray binary 4U 1608−52.  From these data, they infer how the accretion disk physically changes as the X-ray binary fades into quiescence.

During an outburst, material surrounding the compact object forms a geometrically thin, but optically thick (i.e., opaque) accretion disk. Evidence for this disk comes from the detection of disk reflection at X-ray energies, whereby reprocessed photons that irradiate the disk are re-emitted as a series of discrete, relativistically broadened atomic features. However, as the X-ray binary fades to quiescence, there are a range of ideas as to what happens to the material in the accretion disk. Some models predict the accretion disk recedes and disappears, while other models predict the disk physically puffs up, thereby becoming more transparent so that X-ray photons are no longer reflected by the disk. With its sensitive, broad high-energy response, NuSTAR provides a powerful tool for distinguishing between these models.

4U 1608-52 is a Galactic low-mass X-ray binary at a distance of ~3.6 kpc, or about 12,000 lightyears away, with a neutron star compact object. The system goes into outburst a few times per decade, making it a prime target for studying accretion as a source returns to quiescence. When the source entered outburst in 2018, NASA’s NICER and Swift X-ray observatories were quick to monitor the source throughout the outburst, and they detected the expected signatures of disk reflection. Once the source began returning to quiescence, a long NuSTAR observation was triggered to follow the reflection spectrum and track the disk geometry as the source faded.

NuSTAR found that the reflection features disappeared as the system faded into quiescence, and the NuSTAR data were sufficiently deep to rule out any reflection signatures to faint limits. Since even an evaporating inner disk should still show weak reflection signatures from the outer accretion disk, the NuSTAR data imply instead that the disk “puffed up”, switching from being geometrically thin, but optically thick (i.e., opaque) to being geometrically thick, but optically thin (i.e., transparent). Intriguingly, several low-mass X-ray binaries with black hole compact objects have instead shown the other scenario, with the accretion disk receding as the system fades from outburst into quiescence.