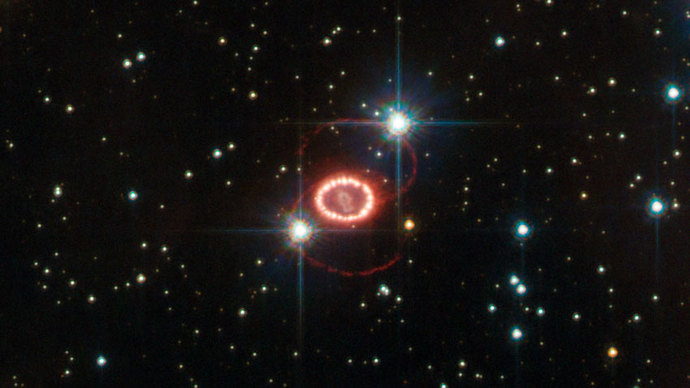 The still unraveling remains of supernova 1987A are shown here in this image taken by NASA's Hubble Space Telescope. The bright ring consists of material ejected from the dying star before it detonated. The ring is being lit up by the explosion's shock wave.Image credit: ESA/Hubble & NASA

NASA's Nuclear Spectroscopic Telescope Array, or NuSTAR, has found evidence that a massive star exploded in a lopsided fashion, sending ejected material flying in one direction and the core of the star in the other.

The findings offer the best proof yet that star explosions of this type, called Type II or core-collapse supernovae, are inherently asymmetrical, a phenomenon that had been difficult to prove before now.

"Stars are spherical objects, but apparently the process by which they die causes their cores to be turbulent, boiling and sloshing around in the seconds before their demise," said Steve Boggs of the University of California, Berkeley, lead author of a new study on the findings, appearing in the May 8 issue of Science. "We are learning that this sloshing leads to asymmetrical explosions."

The supernova remnant in the study, called 1987A, is 166,000 light-years away. Light from the blast that created the remnant lit up skies above Earth in 1987. While other telescopes had found hints that this explosion was not spherical, NuSTAR found the "smoking gun" in the form of a radioisotope called titanium-44.

"Titanium is produced in the very heart of the explosion, so it traces the shape of the engine driving the disassembly of the star," said Fiona Harrison, the principal investigator of NuSTAR at the California Institute of Technology in Pasadena. "By looking at the shift of the energy of the X-rays coming from titanium, the NuSTAR data revealed that, surprisingly, most of the material is moving away from us."

Last year, NuSTAR created detailed titanium-44 maps of another supernova remnant, called Cassiopeia A, also finding evidence of an asymmetrical explosion, though not to as great an extent as in 1987A. Together, these results suggest that lopsidedness is at the very root of core-collapse supernova.

When supernova 1987A first lit up our skies decades ago, telescopes around the world had a unique opportunity to watch the event unfold and evolve. Outer, ejected materials lit up first, followed by the innermost materials powered by radioactive isotopes, such as cobalt-56, which decayed into iron-56. In 2012, the European Space Agency's Integral satellite detected titanium-44 in 1987A. Titanium-44 continues to blaze in the supernova remnant due to its long lifetime of 85 years.

NuSTAR brought a new tool to the study of 1987A. Thanks to the observatory's sharp high-energy X-ray vision, it has made the most precise measurements of titanium-44 yet. This radioactive material is produced at the core of a supernova, so it provides astronomers with a direct probe into the mechanisms of a detonating star.

The NuSTAR spectral data reveal that titanium-44 is moving away from us with a velocity of 1.6 million mph (2.6 million kilometers per hour). That indicates ejected material flung outward in one direction, while the compact core of the supernova, called a neutron star, seems to have kicked off in the opposite direction.

"These explosions are driven by the formation of a compact object, the remaining core of the star, and this seems to be connected to the core blasting one direction, and the ejected material, the other," said Boggs.

Previous observations have hinted at the lopsided nature of supernova blasts, but it was impossible to confirm. Telescopes like NASA's Chandra X-ray Observatory, which sees lower-energy X-rays than NuSTAR, had spotted iron that had been heated in the 1987A blast, but it was not clear if the iron was generated in the explosion or just happened to have been in the vicinity.

"Radioactive titanium-44 glows in the X-rays no matter what and is only produced in the explosion," said Brian Grefenstette, a co-author of the study at Caltech. "This means that we don't have to worry about how the environment influenced the observations. We are able to directly observe the material ejected in the explosion."

Future studies by NuSTAR and other telescopes should further illuminate the warped nature of supernovae. Is 1987A particularly askew, or in line with other objects in its class? A decades-old mystery continues to unravel before our eyes.

To see a simulation of an exploding, sloshing star, watch this video.

NuSTAR is a Small Explorer mission led by the California Institute of Technology in Pasadena and managed by NASA's Jet Propulsion Laboratory, also in Pasadena, for NASA's Science Mission Directorate in Washington.