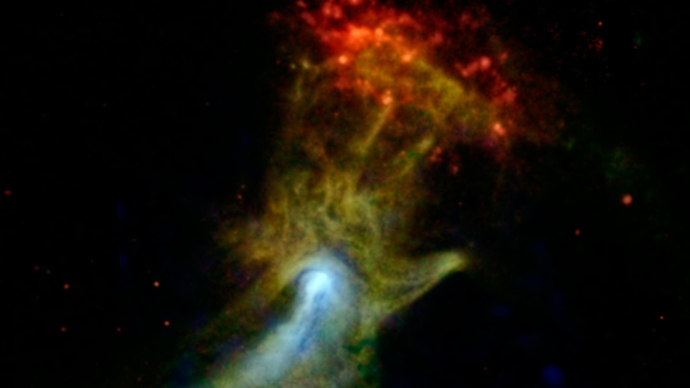 Two new views from NASA's Nuclear Spectroscopic Telescope Array, or NuSTAR, showcase the telescope's talent for spying objects near and far. One image shows the energized remains of a dead star, a structure nicknamed the "Hand of God" after its resemblance to a hand. Another image shows distant black holes buried in blankets of dust.

"NuSTAR's unique viewpoint, in seeing the highest-energy X-rays, is showing us well-studied objects and regions in a whole new light," said Fiona Harrison, the mission's principal investigator at the California Institute of Technology in Pasadena, Calif.

NuSTAR launched into space June 13, 2012, on a mission to explore the high-energy X-ray universe. It is observing black holes, dead and exploded stars and other extreme objects in our own Milky Way galaxy and beyond.

The new "Hand of God" image shows a nebula 17,000 light-years away, powered by a dead, spinning star called PSR B1509-58, or B1509 for short. The dead star, called a pulsar, is the leftover core of a star that exploded in a supernova. The pulsar is only about 19 kilometers (12 miles) in diameter but packs a big punch: it is spinning around nearly seven times every second, spewing particles into material that was upheaved during the star's violent death. These particles are interacting with magnetic fields around the ejected material, causing it to glow with X-rays. The result is a cloud that, in previous images, looked like an open hand.

One of the big mysteries of this object, called a pulsar wind nebula, is whether the pulsar's particles are interacting with the material in a specific way to make it appear as a hand, or if the material is in fact shaped like a hand.

"We don't know if the hand shape is an optical illusion," said Hongjun An of McGill University, Montreal, Canada. "With NuSTAR, the hand looks more like a fist, which is giving us some clues."

The second image from NuSTAR shows active, supermassive black holes between 3 and 10 billion light-years away in a well-studied patch of sky called the COSMOS field (for Cosmic Evolution Survey). Each dot is a voracious black hole at the heart of a galaxy, actively feeding off a surrounding disk of material. NASA's Chandra X-ray Observatory and other telescopes have identified many of the black holes in this field, but some are so heavily obscured in gas and dust that NuSTAR's higher-energy X-ray observations are needed to characterize and understand them. Astronomers hope to use NuSTAR to provide new demographics on the numbers, types and distances to black holes that populate our universe.

"This is a hot topic in astronomy," said Francesca Civano of Yale University, New Haven, Conn. "We want to understand how black holes grew in the past and the degree to which they are obscured." The ongoing research will help explain how black holes and galaxies grow and interact with each other.

NuSTAR's mission operations center is at UC Berkeley, with ASI providing its equatorial ground station located at Malindi, Kenya. The mission's outreach program is based at Sonoma State University, Rohnert Park, Calif. NASA's Explorer Program is managed by Goddard. JPL is managed by Caltech for NASA.