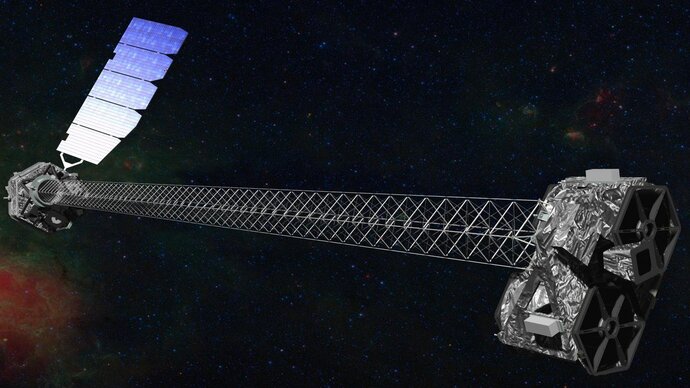 This illustration shows NASA’s NuSTAR X-ray telescope in space. Two bulky components are separated by a 33-foot (10-meter) structure called a deployable mast, or boom. Light is collected at one end of the boom and is focused along its length before hitting detectors at the other end. Credit: NASA/JPL-Caltech

A design quirk in the X-ray observatory has made it possible for astronomers to use previously unwanted light to study even more cosmic objects than before.

For almost 10 years, NASA’s NuSTAR (Nuclear Spectroscopic Telescope Array) X-ray space observatory has been studying some of the highest-energy objects in the universe, such as colliding dead stars and enormous black holes feasting on hot gas. During that time, scientists have had to deal with stray light leaking in through the sides of the observatory, which can interfere with observations much like external noise can drown out a phone call.

But now team members have figured out how to use that stray X-ray light to learn about objects in NuSTAR’s peripheral vision while also performing normal targeted observations. This development has the potential to multiply the insights that NuSTAR provides. A new science paper in the Astrophysical Journal describes the first use of NuSTAR’s stray light observations to learn about a cosmic object – in this case, a neutron star.

Nuggets of material left over after a star collapses, neutron stars are some of the densest objects in the universe, second only to black holes. Their powerful magnetic fields trap gas particles and funnel them toward the neutron star’s surface. As the particles are accelerated and energized, they release high-energy X-rays that NuSTAR can detect.

The new study describes a system called SMC X-1, which consists of a neutron star orbiting a living star in one of two small galaxies orbiting the Milky Way (Earth’s home galaxy). The brightness of SMC X-1’s X-ray output appears to vary wildly when viewed by telescopes, but decades of direct observations by NuSTAR and other telescopes have revealed a pattern to the fluctuations. Scientists have pinpointed several reasons why SMC X-1 changes in brightness when studied by X-ray telescopes. For example, the X-rays’ brightness dims as the neutron star dips behind the living star with each orbit. According to the paper, the stray light data was sensitive enough to pick up on some of those well-documented changes.

“I think this paper shows that this stray light approach is reliable, because we observed brightness fluctuations in the neutron star in SMC X-1 that we have already confirmed through direct observations,” said McKinley Brumback, an astrophysicist at Caltech in Pasadena, California, and lead author of the new study. “Going forward, it would be great if we could use the stray light data to look at objects when we don’t already know if they’re regularly changing in brightness and potentially use this approach to detect changes.”

The new approach is possible because of NuSTAR’s shape, which is similar to dumbbell or dog bone: It has two bulky components at either end of a narrow, 33-foot-long (10-meter-long) structure called a deployable mast, or boom. Typically, researchers point one of the bulky ends – which contains the optics, or the hardware that collects X-rays – at the object they want to study. The light travels along the boom to the detectors, located at the other end of the spacecraft. The distance between the two is necessary to focus the light.

But stray light also reaches the detectors by entering through the sides of the boom, bypassing the optics. It appears in NuSTAR’s field of view along with light from whatever object the telescope directly observes, and is often fairly easy to identify by eye: It forms a circle of faint light emerging from the sides of the image. (Unsurprisingly, stray light is a problem for many other space- and ground-based telescopes.)

A group of NuSTAR team members has spent the last few years separating the stray light from various NuSTAR observations. After identifying bright, known X-ray sources in the periphery of each observation, they used computer models to predict how much stray light should appear based on which bright object was nearby. They also looked at almost every NuSTAR observation to confirm the telltale sign of stray light. The team created a catalog of about 80 objects for which NuSTAR had collected stray light observations, naming the collection “StrayCats.”

“Imagine sitting in a quiet movie theater, watching a drama, and hearing the explosions in the action movie playing next door,” said Brian Grefenstette, senior research scientist at Caltech and the NuSTAR team member leading the StrayCats work. “In the past, that’s what the stray light was like – a distraction from what we were trying to focus on. Now we have the tools to turn that extra noise into useful data, opening an entire new way of using NuSTAR to study the universe.”

Of course, the stray light data can’t replace direct observations by NuSTAR. Aside from stray light being unfocused, many objects that NuSTAR can observe directly are too faint to appear in the stray light catalog. But Grefenstette said multiple Caltech students have combed through the data and found instances of rapid brightening from peripheral objects, which might be any number of dramatic events, such as thermonuclear explosions on the surfaces of neutron stars. Observing the frequency and intensity of a neutron star’s changes in brightness can help scientists decipher what’s happening to those objects.

“If you’re trying to look for a pattern in the long-term behavior or brightness of an X-ray source, the stray light observations could be a great way to check in more often and establish a baseline,” said Renee Ludlam, a NASA Hubble Fellowship Program Einstein fellow at Caltech and member of the StrayCats team. “They could also let us catch odd behaviors in these objects when we don’t expect them or when we wouldn’t normally be able to point NuSTAR directly at them. The stray light observations don’t replace direct observations, but more data is always good.”

NuSTAR launched on June 13, 2012. A Small Explorer mission led by Caltech and managed by JPL for NASA’s Science Mission Directorate in Washington, it was developed in partnership with the Danish Technical University (DTU) and the Italian Space Agency (ASI). The telescope optics were built by Columbia University, NASA’s Goddard Space Flight Center in Greenbelt, Maryland, and DTU. The spacecraft was built by Orbital Sciences Corp. in Dulles, Virginia. NuSTAR’s mission operations center is at the University of California, Berkeley, and the official data archive is at NASA’s High Energy Astrophysics Science Archive Research Center. ASI provides the mission’s ground station and a mirror data archive. Caltech manages JPL for NASA.