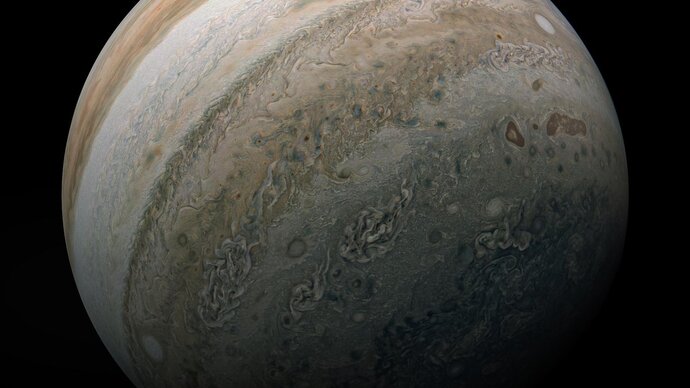 Jupiter’s southern hemisphere is shown in this image from NASA’s Juno mission. New observations by NASA’s NuSTAR reveal that auroras near both the planet’s poles emit high-energy X-rays, which are produced when accelerated particles collide with Jupiter’s atmosphere. Credit: Enhanced image by Kevin M. Gill (CC-BY) based on images provided courtesy of NASA/JPL-Caltech/SwRI/MSSS

The planet’s auroras are known to produce low-energy X-ray light. A new study finally reveals higher-frequency X-rays and explains why they eluded another mission 30 years ago.

Scientists have been studying Jupiter up close since the 1970s, but the gas giant is still full of mysteries. New observations by NASA’s NuSTAR space observatory have revealed the highest-energy light ever detected from Jupiter. The light, in the form of X-rays that NuSTAR can detect, is also the highest-energy light ever detected from a solar system planet other than Earth. A paper in the journal Nature Astronomy reports the finding and solves a decades-old mystery: Why the Ulysses mission saw no X-rays when it flew past Jupiter in 1992.

X-rays are a form of light, but with much higher energies and shorter wavelengths than the visible light human eyes can see. NASA’s Chandra X-ray Observatory and the ESA (European Space Agency) XMM-Newton observatory have both studied low-energy X-rays from Jupiter’s auroras – light shows near the planet’s north and south poles that are produced when volcanoes on Jupiter’s moon Io shower the planet with ions (atoms stripped of their electrons). Jupiter’s powerful magnetic field accelerates these particles and funnels them toward the planet’s poles, where they collide with its atmosphere and release energy in the form of light.

Electrons from Io are also accelerated by the planet’s magnetic field, according to observations by NASA’s Juno spacecraft, which arrived at Jupiter in 2016. Researchers suspected that those particles should produce even higher-energy X-rays than what Chandra and XMM-Newton observed, and NuSTAR (short for Nuclear Spectroscopic Telescope Array) is the first observatory to confirm that hypothesis. 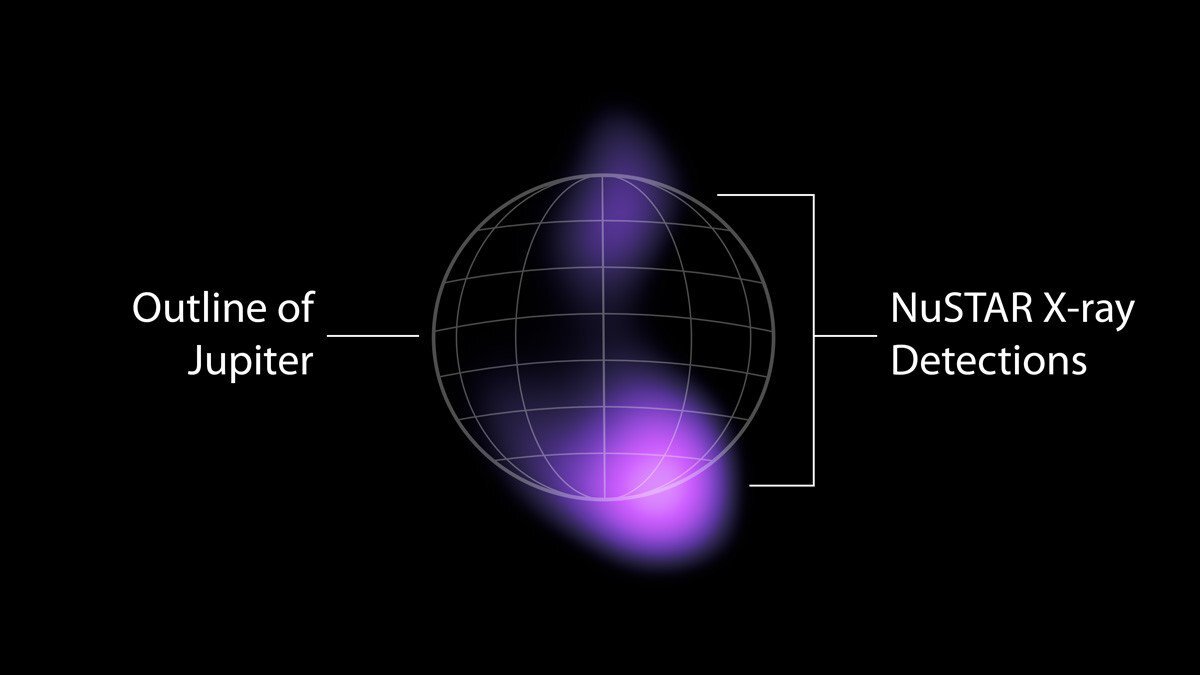 NuSTAR detected high-energy X-rays from the auroras near Jupiter’s north and south poles. NuSTAR cannot locate the source of the light with high precision, but can only find that the light is coming from somewhere in the purple-colored regions. Credit: NASA/JPL-Caltech

“It’s quite challenging for planets to generate X-rays in the range that NuSTAR detects,” said Kaya Mori, an astrophysicist at Columbia University and lead author of the new study. “But Jupiter has an enormous magnetic field, and it’s spinning very quickly. Those two characteristics mean that the planet’s magnetosphere acts like a giant particle accelerator, and that’s what makes these higher-energy emissions possible.”

Researchers faced multiple hurdles to make the NuSTAR detection: For example, the higher-energy emissions are significantly fainter than the lower-energy ones. But none of the challenges could explain the nondetection by Ulysses, a joint mission between NASA and ESA that was capable of sensing higher-energy X-rays than NuSTAR. The Ulysses spacecraft launched in 1990 and, after multiple mission extensions, operated until 2009.

The solution to that puzzle, according to the new study, lies in the mechanism that produces the high-energy X-rays. The light comes from the energetic electrons that Juno can detect with its Jovian Auroral Distributions Experiment (JADE) and Jupiter Energetic-particle Detector Instrument (JEDI), but there are multiple mechanisms that can cause particles to produce light. Without a direct observation of the light that the particles emit, it’s almost impossible to know which mechanism is responsible.

In this case, the culprit is something called bremsstrahlung emission. When the fast-moving electrons encounter charged atoms in Jupiter’s atmosphere, they are attracted to the atoms like magnets. This causes the electrons to rapidly decelerate and lose energy in the form of high-energy X-rays. It’s like how a fast-moving car would transfer energy to its braking system to slow down; in fact, bremsstrahlung means “braking radiation” in German. (The ions that produce the lower-energy X-rays emit light through a process called atomic line emission.)

Each light-emission mechanism produces a slightly different light profile. Using established studies of bremsstrahlung light profiles, the researchers showed that the X-rays should get significantly fainter at higher energies, including in Ulysses’ detection range.

“If you did a simple extrapolation of the NuSTAR data, it would show you that Ulysses should have been able to detect X-rays at Jupiter,” said Shifra Mandel, a Ph.D. student in astrophysics at Columbia University and a co-author of the new study. “But we built a model that includes bremsstrahlung emission, and that model not only matches the NuSTAR observations, it shows us that at even higher energies, the X-rays would have been too faint for Ulysses to detect.”

The conclusions of the paper relied on simultaneous observations of Jupiter by NuSTAR, Juno, and XMM-Newton.

On Earth, scientists have detected X-rays in Earth’s auroras with even higher energies than what NuSTAR saw at Jupiter. But those emissions are extremely faint – much fainter than Jupiter’s – and can only be spotted by small satellites or high-altitude balloons that get extremely close to the locations in the atmosphere that generate those X-rays. Similarly, observing these emissions in Jupiter’s atmosphere would require an X-ray instrument close to the planet with greater sensitivity than those carried by Ulysses in the 1990s.

“The discovery of these emissions does not close the case; it’s opening a new chapter,” said William Dunn, a researcher at the University College London and a co-author of the paper. “We still have so many questions about these emissions and their sources. We know that rotating magnetic fields can accelerate particles, but we don’t fully understand how they reach such high speeds at Jupiter. What fundamental processes naturally produce such energetic particles?”

Scientists also hope that studying Jupiter’s X-ray emissions can help them understand even more extreme objects in our universe. NuSTAR typically studies objects outside our solar system, such as exploding stars and disks of hot gas accelerated by the gravity of massive black holes.

The new study is the first example of scientists being able to compare NuSTAR observations with data taken at the source of the X-rays (by Juno). This enabled researchers to directly test their ideas about what creates these high-energy X-rays. Jupiter also shares a number of physical similarities with other magnetic objects in the universe – magnetars, neutron stars, and white dwarfs – but researchers don’t fully understand how particles are accelerated in these objects’ magnetospheres and emit high-energy radiation. By studying Jupiter, researchers may unveil details of distant sources we cannot yet visit.

More About the Missions

NuSTAR launched on June 13, 2012. A Small Explorer mission led by Caltech and managed by JPL for NASA's Science Mission Directorate in Washington, it was developed in partnership with the Danish Technical University and the Italian Space Agency (ASI). The telescope optics were built by Columbia University; NASA’s Goddard Space Flight Center in Greenbelt, Maryland, and DTU. The spacecraft was built by Orbital Sciences Corp. in Dulles, Virginia. NuSTAR’s mission operations center is at the University of California, Berkeley, and the official data archive is at NASA’s High Energy Astrophysics Science Archive Research Center. ASI provides the mission’s ground station and a mirror data archive. Caltech manages JPL for NASA.

For more information on NuSTAR, go to:

JPL manages the Juno mission for the principal investigator, Scott J. Bolton of the Southwest Research Institute in San Antonio. Juno is part of NASA’s New Frontiers Program, which is managed at NASA’s Marshall Space Flight Center in Huntsville, Alabama, for the agency’s Science Mission Directorate. Lockheed Martin Space in Denver built and operates the spacecraft.