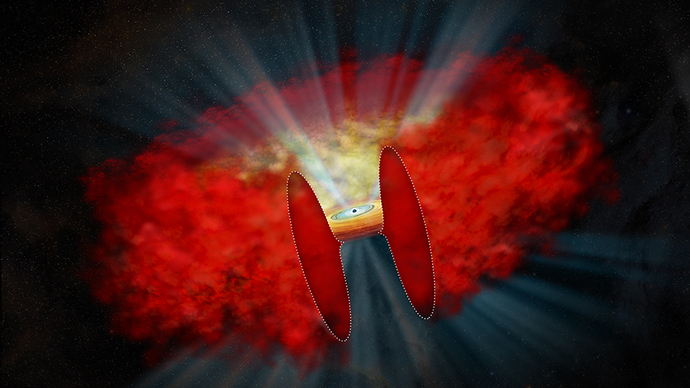 Artist's illustration depicting a black hole wrapped in a toroidal, or donut-shaped cocoon of gas and dust. Seen edge-on like in this illustration, the cocoon shields our view of the hot disk of matter falling onto the black hole, as well as the associated fast-moving material being blown away from the disk. The visible and low-energy X-ray light from the central region is almost fully hidden while the high-energy X-rays that NuSTAR observes are more penetrating and are detected. Seen face-on, such as from above or below, the central region is visible at all energies. A portion of the cocoon is cut out in this illustration to show the heavily obscured black hole. Understanding the geometry and properties of this obscuring region has important implications for understanding how supermassive black holes – and the galaxies that they reside within – grow and evolve over cosmic time. (Credit: NASA/CXC/M.Weiss)

How many fireflies are in your backyard? Can you count them all? It’s a challenge.
Their flashes are short. More distant fireflies are fainter – but could fainter ones also be younger, older, or smaller fireflies? How often does a firefly flash? And imagine if there were mist or smoke from a camp fire, making them even harder to see.

One solution is not to try to count all of the fireflies in the entire yard, but to watch for a long time in just a small square of the yard, closer to you. Later, if you add up how many squares of that size are in your yard, you can figure out the total number of flies. At least if there is no fog or smoke. In that case, you would want a special camera that could see through the fog.

This is the challenge that astronomers have when they want to count how many black holes are in the universe, particularly the supermassive black holes that reside in the centers of large galaxies. Like fireflies, black holes are usually quiet, with no matter falling in on them. But when matter does fall on them, that accreting matter heats up and shines brightly. However, like mist or smoke in a yard, gas and dust in a galaxy can hide the accreting black holes – and NASA’s NuSTAR mission has the special camera that can see through the gas and dust, and thus provide an accurate count of black holes. NuSTAR is sensitive to high-energy X-rays, similar to the X-rays used by doctors and airport security, enabling it to detect energetic photons from accreting supermassive black holes that penetrate the enshrouding gas and dust.

In a paper recently published in the Astrophysical Journal, Elias Kammoun and collaborators used NuSTAR to study a carefully selected sample of 19 nearby galaxies with faint indications of actively accreting supermassive black holes at their centers. Like the insect census worker trying to understand the firefly population in a small part of their backyard, Kammoun and collaborators used NuSTAR to understand if their sample of nearby galaxies were faint because their black holes were intrinsically faint or if, instead, they were intrinsically luminous black holes enshrouded behind thick curtains of gas and dust.

Kammoun and collaborators found that 80-90% of their sample were indeed obscured by very dense material, with 32-50% of the sample obscured by extremely thick columns of material, reaching that very high level that astronomers refer to as “Compton-thick”. Furthermore, they found strong indications that the obscuring material surrounding accreting supermassive black holes is mostly regulated by radiation pressure. Including the local galaxies that clearly show bright, unobscured active galaxies, this work found that 13-22% of local galaxies have Compton-thick absorption, roughly consistent with other estimates of this fraction based on very different assumptions and very different sets of data. Importantly, the NuSTAR observations directly measured the thickness of the obscuring column, while previous work generally relied on indirect measurements.