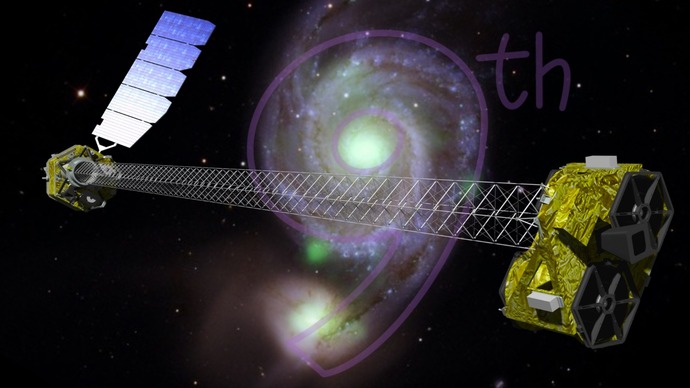 It’s been just over nine years since NASA’s NuSTAR mission was dropped from the belly of the Orbital (now Northrop Grumman Innovation Systems) L-110 “Stargazer” aircraft at 4 AM local time, 9 AM Pacific, and 12 pm at NASA Headquarters. Stargazer took off from the Kwajalein Atoll in the Pacific Ocean and circled the launch “runway” for an hour before NuSTAR was dropped, tucked in its “stowed” configuration” behind the faring (nose cone), on its Pegasus XL ride to space.

After arriving in orbit, NuSTAR’s journey to becoming the first focusing hard X-ray observatory in space was still not complete. After deploying its solar panels to power the spacecraft through nearly a week of “in orbit checkout”, the NuSTAR team held its breath until the 10-m long deployable “mast” extended, bringing the hard X-ray Universe into focus for the first time.

Since that day NuSTAR has continued its epic journey to provide the astronomical community with a unique view of remnants of supernova explosions, like black holes and neutron stars, as well as the monster black holes that live in the centers of galaxies.

The observatory screams through the sky with an average speed of 7.5 km per second, fast enough to make the journey from Los Angeles to New York City in less than 10 minutes. Or, for people familiar with Southern California traffic, at this speed NuSTAR makes the trip from the Caltech Campus in Pasadena to the Santa Monica Pier in ~90 minutes (the long way around the globe), or about 5 seconds on the direct route.

For the last 9 years, NuSTAR data has enabled new discoveries by a vibrant, global science community. Over 950 papers have been published since NuSTAR launched and these papers have been cited in the scientific literature >14,000 times. More than 30 Ph.D. thesis have resulted from work on NuSTAR observations.

The NuSTAR science community has expanded dramatically from the core instrument and science teams with a few dozen intrepid professors, students, and research staff, to a vibrant and growing community of over 500 astronomers per year publishing NuSTAR data. The core team has also continued to expand, with many new children, one horse, and copious numbers of dogs and cats.

NuSTAR continues to open new horizons, discover fascinating new objects, and expand our knowledge of the Universe.  Opportunities to observe with NuSTAR are available to the global community through annual NuSTAR Announcements of Opportunity (AOs) in January, as well as through AOs on Chandra, NICER, Swift, and XMM-Newton. The NuSTAR team looks forward to many more years of exploring the Universe.