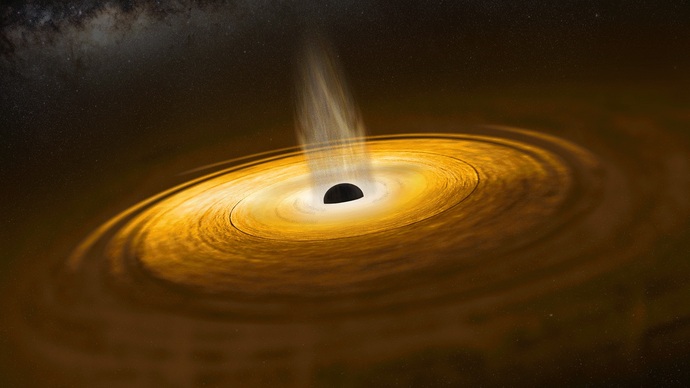 Artist’s impression of material spiraling into a black hole. Most of the material forms into a hot accretion disk, while some hot plasma forms an X-ray emitting “corona”, illustrated here as vertical structure above the accretion disk. Using NuSTAR and XMM-Newton, astrophysicists are studying the mysterious low-energy, or soft X-ray emission seen from many black holes, which may be related to a second corona. Image credit: ESA

There are behemoths lurking in the centers of nearly all galaxies. A supermassive black hole, with a mass millions to billions times that of our Sun, dominates the center of all large galaxies, shredding stars and gas clouds that come too close and drawing the debris into a swirling disk surrounding the black hole. Friction heats the disk to high temperatures, causing it to produce ultraviolet (UV) and optical light, and some of that light is up-scattered to X-rays by the hot plasma that also seems endemic to these monstrous systems.  Like the 4-million solar mass black hole at the center of our own Milky Way Galaxy, most supermassive black holes will be largely quiet and devoid of such a hot disk.  But when these black holes are actively accreting material, they become some of the most luminous objects in the universe and are referred to as “active galactic nuclei”, or AGN.

The spectrum of light that reaches us comes from the hot accretion disk peaks in the UV. We refer to this as the “thermal” emission, and it is the hotter version of how people, relatively cool to an astronomer, shine in infrared light and incandescent light bulbs, slightly warmer, shine in visible light. In addition, powerful “non-thermal” emission is produced by the UV photons colliding with hot electrons in a plasma, or “corona”, that surrounds the black hole, energizing them into the X-ray band. This results in a characteristic “power law” continuum emission typically observed by X-ray telescopes.

However, there is also a mysterious “soft excess” that is sometimes observed in AGN. This enigmatic emission is a relatively strong, broad, and featureless component in the X-ray spectra of some AGN. This emission peaks at lower energy, or “soft” X-ray energies (less than ~1 keV) and it can overwhelm the characteristic power-law continuum that dominates typical AGN X-ray spectra. A soft excess has been observed in at least half of nearby AGN and it can carry a large fraction of the observed X-ray flux of AGN. However, its physical origin has been a matter of debate since its discovery in the early 1980s.

There are two main competing scenarios that have been proposed to explain the nature of the soft excess. One explanation is the two-corona model, which postulates that there are two regions producing non-thermal emission. One of these is the hot corona seen in most AGN, while a second warm corona is seen in some AGN, coming from a plasma that is both cooler and thicker. X-rays in the less energetic corona repeatedly scatter and produce a lower energy, or softer, X-ray spectrum. The second scenario instead postulates that the soft excess results from X-rays from the hot corona shining back down and reflecting off of the accretion disk. In this case, the soft excess results from a forest of fluorescent emission lines from atoms in the disk, which are typically at low X-ray energies. The strong gravity of the black hole and the high speeds of the accretion disk then “blur” these lines into the observed soft excess.

In a paper recently published in Astronomy & Astrophysics, Francesco Ursini and collaborators analyzed coordinated observations of the AGN in HE 1143-1810 taken with NASA’s NuSTAR satellite and the European Space Agency’s XMM-Newton satellite. NuSTAR provided sensitive coverage of the high-energy X-rays from this source, thereby constraining the AGN power-law emission, while XMM-Newton, sensitive to the low-energy X-rays, observed the soft excess. Working together, these two telescopes are able to model the broadband X-ray spectrum of this AGN and to track how the spectrum changes over time. Based on their analysis, Ursini and collaborators favor the two-corona origin for the soft excess over the reflection model.

In an earlier paper published in the Astrophysical Journal, Javier García and collaborators analyzed NuSTAR high-energy and Suzaku low-energy observations of the AGN in Mrk 509. Like Ursini and collaborators, they also considered both the two-corona model and the relativistically blurred reflection model to explain the soft excess in this source. While García and collaborators show that both models produce statistically acceptable fits to their data, they argued that the latter model is preferred on the basis of physics. Specifically, the warm corona is expected to produce very strong absorption features which are not observed. While the relativistic reflection model requires very high densities and a black hole spinning close to the maximum rate allowed by Einstein’s theories in order to produce the soft and broad component, such extreme values are allowed, and even observed in some sources. Ursini noted that more recent theoretical models show that these warm corona absorption lines can be avoided if the second corona has a source of internal heating, as might be the case if the warm corona is essentially a hot atmosphere to the accretion disk.

In short, the tale of two coronas continues. Astronomers are obtaining better observations of AGN with a soft excess, and, ironically, the high-energy, or hard X-ray NuSTAR satellite plays a unique and very important role in these observations by constraining the underlying hot corona emission.  Models are also improving, trying to keep pace with the observations. We can expect some advancement in the coming years from NuSTAR and current low-energy observatories, and even greater advancement when next generation X-ray satellites come on line with unique, new capabilities such as X-ray polarimetry, high-resolution X-ray spectroscopy, and improved sensitivity to higher energy X-ray emission.