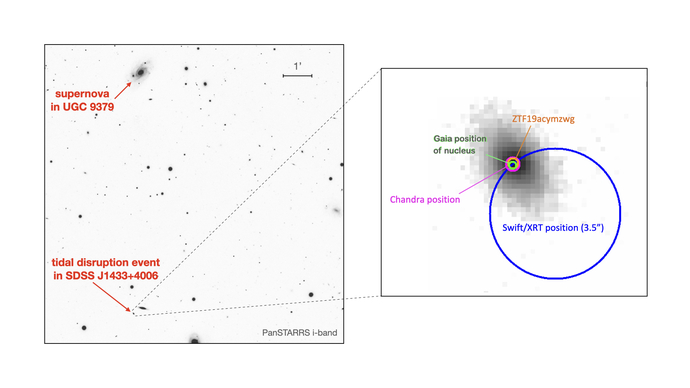 PanSTARRS image of the nearby galaxy UGC 9379, host of the recent supernova SN 2020bvc that was observed by NASA's Swift satellite. Those data serendipitously identified an X-ray flare associated with a tidal disruption event in the more distant galaxy SDSS J143359.16+400636.0. The inset shows the optical position of the galaxy from Gaia (green circle), the position of the transient identified by the X-Ray Telescope (XRT) on Swift (blue circle), a refined X-ray position from Chandra follow-up observations (magenta), and the associated optical transient identified by ZTF (orange).

Black holes millions of times the mass of our Sun sit in the center of every large galaxy. Occasionally, roughly once every 50,000 years, a star will wander too close to the black hole. Gravitational forces will stretch the star, similar but much more extreme than how the Moon produces tides on Earth. If the star comes too close and the black hole is the correct mass, neither too large nor too small, the tidal forces will tear apart the star, leaving the remaining gas and dust to stream onto the black hole in a luminous “tidal disruption event”. Such events were first predicted in the 1970s, but not actually observed for another two decades.  These events can outshine an entire host galaxy, especially in X-rays, and remain luminous for weeks to months. However, tidal disruption events are rare and usually short-lived, so astronomers have to constantly scan the sky with telescopes to try to find them. The main players in this game of late have been optical survey telescopes such as the Zwicky Transient Facility (ZTF) and the All-Sky Automated Survey for SuperNovae (ASAS-SN).

In a paper recently published in the Astrophysical Journal, Murray Brightman and collaborators report the discovery of a new transient event, first detected serendipitously by NASA’s Neil Gehrels Swift Observatory while studying a young supernova in the nearby galaxy UGC 9379.  This X-ray flare was detected in the nucleus of the more distant and relatively anonymous galaxy SDSS J143359.16+400636.0. The X-ray flare spurred a comprehensive campaign to study this source using NASA’s NuSTAR and Chandra X-ray telescopes as well as observations using ZTF and the Keck Observatory to determine and study the nature of this source.

One key question was whether the transient resulted from a flare from an regularly accreting supermassive black hole at the center of the galaxy, or whether it was actually a tidal disruption event. Using the combined power of NuSTAR at high energy X-rays with Chandra at lower energy X-rays, supplemented with the observations in the ultraviolet and optical, Brightman and collaborators were able to show that the source didn’t look like normal feeding of black hole, but was instead more likely the black hole binging on star, i.e., a tidal disruption event.

This is one of only a handful of tidal disruption events that have been found to date at X-ray energies.  In particular, though a flare was detected from this event by wide-field optical surveys, those surveys failed to recognize that the brightening was due to the tidal disruption of a star by a supermassive black hole because of the multitude of other optical flaring phenomena such as supernovae and AGN variability.  X-ray and ultraviolet surveys are predicted to be much more powerful for identifying tidal disruption events, with much less contamination.  Astronomers are excited to see this promise demonstrated with recent and future space missions, and are eager to see if our understanding of tidal disruption events has been biased by our reliance to date on optical surveys to find them.