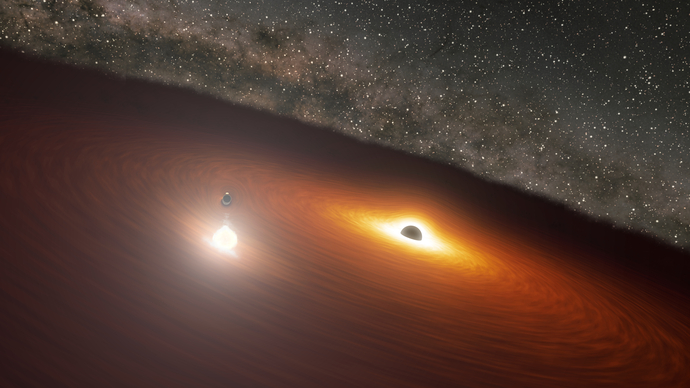 Astronomers have used NASA’s NuSTAR telescope to detect a flare from one of the largest black holes known. OJ 287 is a blazar hosting a black hole with the mass 18 billion times that of the Sun at a distance of 5 billion lightyears. This supermassive black hole is orbited by a smaller companion black hole, “only’’ 150 million times more massive than the Sun. These black holes, about 1000 times and 40 times more massive than the black hole at the center of our own Milky Way galaxy, are in a cosmic dance.  The smaller black hole in OJ 287 plunges through the accretion disk surrounding the more massive black hole approximately twice every 12 years, producing phenomenally bright flashes that last a few weeks and outshine a typical galaxy.  OJ 287 is the only plunging binary supermassive black hole system currently known, and provides a unique laboratory to study black hole feeding, jet formation, and general relativity.

These flashes have been recorded by astronomers since 1891, first on photographic plates, then on electrical devices, and, most recently, from observatories in space. During these events, OJ 287 sometimes gets bright enough to be seen with binoculars, making it amongst the most distant objects visible without a telescope. Astronomers predicted the time of the most recent flare in July 2019 and observed it using the Spitzer Space Telescope. Impressively, the flare was observed within four hours of its predicted arrival. Scaling this system down, this would be the equivalent of a person in California predicting what time a cuckoo clock in Germany went off to better than 3 femtoseconds, or 3 millionths of a nanosecond.

The passage of the smaller black hole through the disk of material around the larger black hole can also cause after-flares of emission seen in the X-rays. Stefanie Komossa of the Max Planck Institute for Radio Astronomy in Bonn, Germany and Dirk Grupe of Morehead State University in Kentucky have been monitoring OJ 287 since late 2015 with NASA’s Swift satellite looking for these flares and after-flares. In a recently published paper, Komossa and collaborators report a flare of ultraviolet and X-ray emission from OJ 287 detected between April and June of this year, nearly a year after the impact flare in July 2019.  Once the after-flare was detected with Swift, Komossa and her collaborators quickly triggered additional observations with NuSTAR and other X-ray telescopes to study the flare.

Komossa reports that the 2020 outburst is consistent with an after-flare, one of the predictions of the plunging binary black hole system but something that had not been seen at X-ray energies previously. The impact of the smaller black hole through the disk of the bigger black hole triggers a cascade in the disk that produces enhanced accretion and jet activity by the primary black hole with a several month delay, which was seen by NuSTAR.