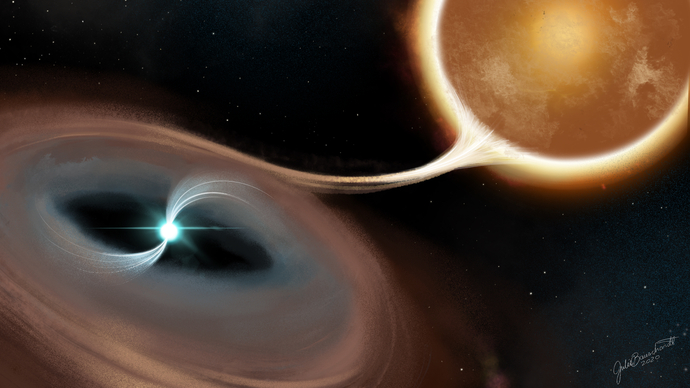 White dwarfs are the end-stage of stars like our own Sun – dense, hot cores of dead stars that are comparable to the size of the Earth. Often, white dwarfs are found in binary systems accreting matter from another Sun-like star, forming a disk of hot material around the white dwarf and emitting light across the electromagnetic spectrum.

Shaw and collaborators have used NASA’s NuSTAR observatory to conduct a deep survey of a subset of these accreting systems called magnetic cataclysmic variables (CVs), where the central white dwarf has a magnetic field more than one million times stronger than that of the Earth’s. In magnetic CVs, the material from the companion star flows along the magnetic field lines and, when it reaches the surface of the white dwarf, forms a shock that heats up to millions of degrees. The temperature of this shock is directly related to the gravity of the white dwarf and therefore its mass, and can be measured by studying the X-rays that the shock produces, which are observed by NuSTAR.

The NuSTAR survey found that the white dwarfs in mCVs typically have a mass ¾ that of the Sun. This is contrary to non-accreting white dwarfs, which have an average mass approximately ½ that of the Sun. Previous, careful studies of a different population of regular, non-magnetic CVs found a similar answer – ¾ of the mass of the Sun – leading to the conclusion that all accreting white dwarfs, whether non-magnetic or not, are more massive than their non-accreting counterparts.

Apart from the mass measurements published in this study, the NuSTAR observations of approximately two dozen magnetic CVs leaves behind a rich legacy dataset that represents the highest quality, high energy survey of these objects yet.