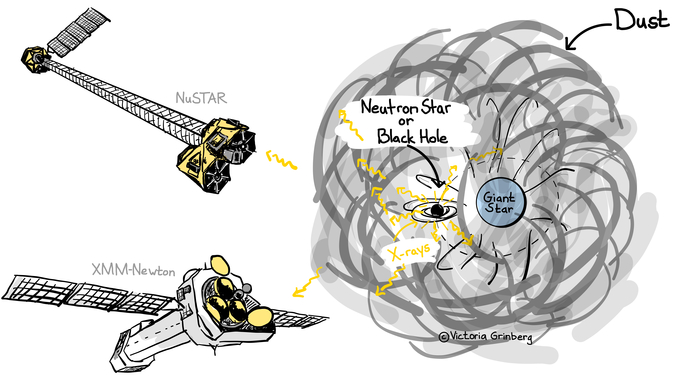 Artist (and co-author) illustration of the IGR J16318-4848 system, as observed by NuSTAR and XMM-Newton. A young, massive star is generating a strong wind, which both feeds the compact companion and enshrouds the whole system in dust and gas. The companion, either a neutron star or black hole, is the remnant of an exploded, more massive star. As the remnant feeds on this stellar wind, a very hot accretion disk forms and generates X-ray emission. Though the dust shroud absorbs most of the lower energy X-rays from this disk, higher energy X-rays escape and are observed by NuSTAR. The absorbed X-rays also cause iron and nickel fluorescence in the dusty shroud, which is primarily observed by XMM-Newton.

NASA’s NuSTAR and ESA’s XMM-Newton satellites have observed a young, massive star in close orbit with the compact remnant from a collapsed star, thereby studying how massive stars evolve and interact. The system, named IGR J16318-4848 and situated in one of the spiral arms of the Milky Way Galaxy, is cocooned in a thick shroud of dust. The young supergiant star is feeding material onto the compact object, which is either a neutron star or black hole left over from the explosion of a more massive star.  High-mass X-ray binaries, such as this, are strong X-ray sources and constitute a crucial phase in the life of the most massive stars in our universe. During this phase, the companion star primarily loses material through its dense wind. The mass loss both affects the future evolution of the stellar companion itself as well as of the binary system as a whole. As in the case of IGR J16318-4848, the wind material can enshroud the whole system and obscure most of the light it emits. However, such systems are still observable at X-ray wavelengths since X-rays can penetrate even thick material.  Observations by X-ray satellites can thereby reveal properties of extreme stellar winds and improve our understanding of how stars evolve.

IGR J16318-4848, discovered in 2003 and an enigma ever since, is one of the most obscured X-ray binaries known. It is so heavily absorbed that only the most energetic, most penetrating X-ray light escapes the thick shroud, and the X-ray emission is dominated by strong features associated with fluorescing iron and nickel.

Previous X-ray observations of IGR J16318-4848 by several satellite missions have raised puzzling questions about the absorbing material: What can produce such strong fluorescence lines? Why is the predicted irregular shape of the heavily absorbed iron emission line not observed? Furthermore, an observation of the source with the Japanese Hitomi mission in 2016 found that the absorbing material is not highly ionized.  How can this be when the material is being irradiated so intensely from the central source?

The combined power of NASA's NuSTAR telescope and the European Space Agency's XMM-Newton observatory has now revealed an intriguing picture. Coordinated observations of IGR J16318-4848 were performed by the two missions and analyzed by Ralf Ballhausen and collaborators. The researchers used a new approach to model the absorption and fluorescence of the source.  While previous work has typically modeled the X-ray emission of high-mass X-ray binaries with a low density, highly ionized plasma,  Ballhausen and collaborators noted that recent infrared observations of IGR J16318-4848 showed that it contains a large amount of cold and warm dust. Building on this, Ballhausen and collaborators investigated how the presence of dust inside the binary system affects the X-rays.

This study required good sensitivity and energy resolution around the X-ray iron emission lines, provided by XMM-Newton, as well as an accurate measurement of the broad X-ray spectrum to high energies, provided by NuSTAR.  These high energy X-ray photons are the primary radiation that drives the fluorescence process. "We were really lucky to have obtained broadband data of sufficient quality, thanks to the combined capabilities of XMM-Newton and NuSTAR", said Ballhausen.

Ballhausen and collaborators found that X-ray fluorescence like that seen in IGR J16318-4848 can be produced if a cocoon of dust enshrouds the system. Ballhausen adds "We realized that dust might be a solution to the mystery, as it can produce fluorescence lines that are strong, undistorted, but still not ionized even under such extreme X-ray irradiation". A possible, though not unique, solution for the dust's composition is olivine, a magnesium iron silicate also common on Earth.  Indeed, the gem peridot is one variety of olivine.

Recognizing the importance of dust is a new step in our understanding of this complex source and is crucial to our understanding of X-ray binaries in general. These results open a new door for studying mass loss in massive stars and how such systems behave and evolve. Future observations of similar X-ray binaries with NuSTAR and XMM-Newton, but also with future missions, will have to show whether IGR J16318-4848 is unique in the contribution of circumstellar dust or whether it is just one of the most extreme examples.