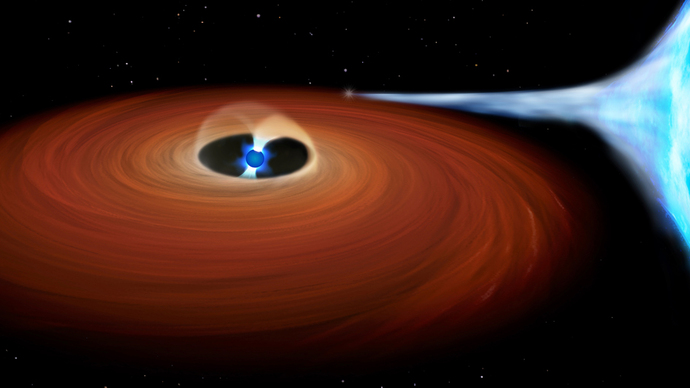 Artist's conception of a neutron star being fed by a companion star. As the neutron star spins, polar hot spots and beaming generate pulses like a cosmic lighthouse. Image credit: NAOJ.

Bachetti and collaborators recently published a comprehensive, multi-year study of the pulsation history of M82 X-2, the first example of the new class of extremely luminous X-ray binary that NuSTAR discovered in 2014 (see NASA's NuSTAR Telescope Discovers Shockingly Bright Dead Star). X-ray binaries are astronomical systems where a compact object, either a neutron star or a black hole, is hungrily eating a nearby star. The luminosity of these objects is roughly related to the amount and speed at which they accrete matter from the companion star, and the most extreme of the X-ray binaries are called “ultraluminous X-ray sources,” or ULXs.  ULXs have luminosities so large that they must be the greediest eaters. Prior to 2014, ULXs were thought to be the missing link of “medium-size” black holes connecting smaller, stellar black holes that reside throughout our own Milky Way Galaxy with the supermassive black holes that live in the centers of most, if not all, large galaxies.

NuSTAR discovered that one of the ULXs in the nearby M82 galaxy “pulses” in X-rays, which means that at least some ULXs are pulsating neutron stars, or pulsars, and not black holes at all. This is because black holes are incapable of maintaining long-term, coherent pulsations while neutron stars can pulsate like a cosmic lighthouse. And, since neutron stars can only grow to masses a few times that of the Sun, this means that neutron stars like M82 X-2 are gorging themselves, eating more than their fair share of their companion

The discovery of these extremely luminous pulsars has led to a host of questions, including if other phenomena — such beaming of the X-ray emission —  can amplify the luminosity of these objects and make them appear to be more voracious eaters than they actually are. How can we measure the amount of matter that is actually captured by the compact object?

In part, this is an easier question to answer when the compact object is a pulsar like M82 X-2 rather than a black hole. Like a figure skater bringing her arms in closer, the material falling onto the neutron star can “spin up” the system. And if any material is thrown off the neutron star, then the system can “spin down”. By carefully tracking the arrival of the pulses, astronomers can learn about how these extreme systems are fed. NuSTAR has followed this extreme pulsar's behavior since 2014 with regular observations, harnessing NuSTAR’s superior sensitivity to the high-energy X-ray emission where the pulsations are the strongest.

Bachetti and collaborators report on this long observing campaign, showing that the pulsar rotation has accelerated and, for the first time in such a source, decelerated over time. Through the careful measurement of this acceleration and deceleration over long periods of time, astronomers are achieving better and better estimates of the amount of matter falling on the neutron star. At the same time, this campaign also characterized the orbit of the system so precisely that, in the next few years, we will be able to measure the mass accretion through tiny variations in the orbital period.