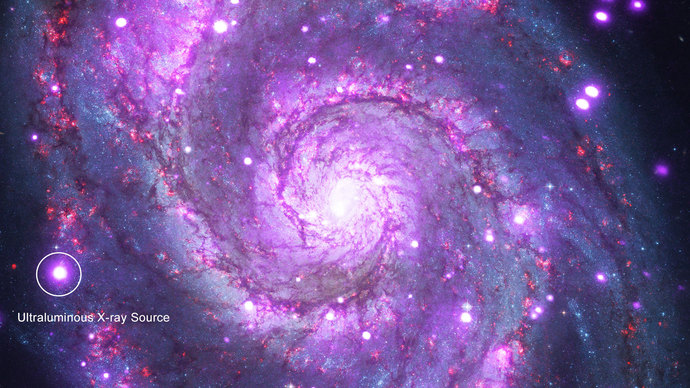 A Caltech-led astronomy team is homing in on the nature of extreme objects known as ULXs.

In the 1980s, researchers began discovering extremely bright sources of X-rays in the outer portions of galaxies, away from the supermassive black holes that dominate their centers. At first, the researchers thought these cosmic objects—called ultraluminous X-ray sources, or ULXs—were hefty black holes with more than 10 times the mass of the sun. But observations beginning in 2014 from NASA's NuSTAR (Nuclear Spectroscopic Telescope Array) and other space telescopes are showing that some ULXs, which glow with X-ray light equal in energy to millions of suns, are actually neutron stars—the burnt-out cores of massive stars that exploded. Three such ULXs have been identified as neutron stars so far.

Now, a Caltech-led team using data from NASA's Chandra X-ray Observatory has identified a fourth ULX as being a neutron star—and found new clues about how these objects can shine so brightly.

Neutron stars are extremely dense objects—a teaspoonful of neutron star would weigh about a billion tons, or as much as a mountain. Their gravity pulls surrounding material from companion stars onto them; when this material is tugged on, it heats up and glows with X-rays. But as the neutron stars "feed" on the matter, there comes a time when the resulting X-ray light pushes the matter away. Astronomers call this point—the point at which the objects cannot accumulate matter any faster and cannot give off any more X-rays—the Eddington limit.

"In the same way that we can only eat so much food at a time, there are limits to how fast neutron stars can accrete matter," says Murray Brightman, a postdoctoral scholar at Caltech and lead author of a new report on the findings in Nature Astronomy. "But ULXs are somehow breaking this limit to give off such incredibly bright X-rays, and we don't know why."

In the new study, the researchers looked at a ULX in the Whirlpool galaxy, also known as M51, which lies about 28 million light-years away. They analyzed archival X-ray data taken by Chandra and discovered an unusual dip in the ULX's light spectrum. After ruling out all other possibilities, they figured out that the dip was from a phenomenon called cyclotron resonance scattering, which occurs when charged particles—either positively charged protons or negatively charged electrons—circle around in a magnetic field. Black holes don't have magnetic fields, but neutron stars do, so the finding revealed that this particular ULX in M51 had to be a neutron star.

Cyclotron resonance scattering creates telltale signatures in a star's spectrum of light, and the presence of these patterns, called cyclotron lines, can provide information about the strength of the star's magnetic field—but only if the cause of the lines, whether it be protons or electrons, is known. With regards to this ULX, the researchers don't have a detailed-enough spectrum to say for certain.

"If the cyclotron line is from protons, then we would know that these magnetic fields around the neutron star are extremely strong and may in fact be helping to breaking the Eddington limit," says Brightman. Such strong magnetic fields could reduce the pressure from a ULX's X-rays—the pressure that normally pushes away matter—allowing the neutron star to consume more matter than is typical and shine with the extremely bright X-rays.

If the cyclotron line is from circling electrons, in contrast, then the magnetic field strength around the neutron star would not be exceptionally strong, and thus the field would probably not be the reason these stars break the Eddington limit.

To further address the mystery of how neutron stars are breaking this limit, the researchers are planning to acquire more X-ray data on the ULX in M51 and look for more cyclotron lines in other ULXs.

"The discovery that these very bright objects, long thought to be black holes with masses up to 1,000 times that of the sun, are powered by much less massive neutron stars, was a huge scientific surprise," says Fiona Harrison, Caltech's Benjamin M. Rosen Professor of Physics; the Kent and Joyce Kresa Leadership Chair of the Division of Physics, Mathematics and Astronomy; and the principal investigator of the NuSTAR mission. "Now we might actually be getting firm physical clues as to how these small objects can be so mighty."