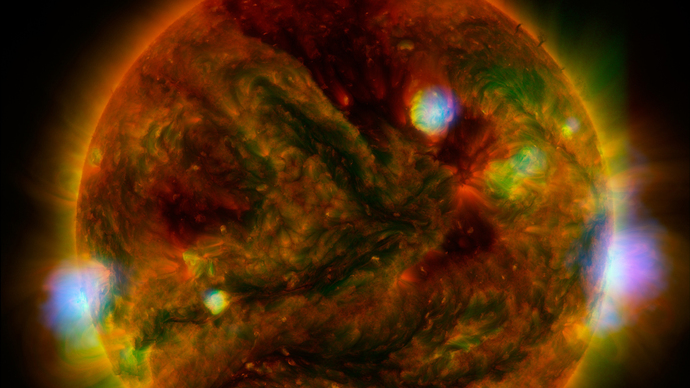 Flaring, active regions of our sun are highlighted in this image combining observations from several telescopes. High-energy X-rays from NASA's Nuclear Spectroscopic Telescope Array (NuSTAR) are shown in blue; low-energy X-rays from Japan's Hinode spacecraft are green; and extreme ultraviolet light from NASA's Solar Dynamics Observatory (SDO) is yellow and red. All three telescopes captured their solar images around the same time on April 29, 2015. Credit: NASA/JPL-Caltech

NuSTAR (Nuclear Spectroscopic Telescope Array) is a NASA mission led by Caltech and principal investigator Fiona Harrison, the Benjamin M. Rosen Professor of Physics and Kent and Joyce Kresa Leadership Chair of the Division of Physics, Mathematics and Astronomy. As the telescope orbits around Earth, it stares deep into the cosmos to measure the X-rays emitted from energetic phenomena such as supernovas. Occasionally, scientists will turn NuSTAR toward our sun, measuring X-rays from so-called active regions—spots where solar magnetic field lines collide, often causing plasma to blast into space, in a process called reconnection.

"Because it orbits near the equator, NuSTAR will only see a partial solar eclipse, about 30 percent of totality," says Brian Grefenstette, a research scientist on the NuSTAR team at Caltech. "However, we got lucky in that this partial eclipse will block out a single active region. As the moon's edge progressively covers the region, scientists will be able to determine with unusual precision how both the brightness and temperature of the region vary over its extent." Because of the unpredictability of where the active regions will fall relative to the regions blocked by the moon, NuSTAR's scientists only determined that they would be able to make these measurements a week before the eclipse.

Understanding the X-ray energy contained in an active region may be an important step toward solving a long-standing mystery: why the sun's corona—the vast, diffuse aura of plasma particles visible during a total eclipse—is so much hotter than its surface.

"Active regions are where the heating of the corona is most violent," says David M. Smith of UC Santa Cruz, who leads the NuSTAR solar science team. "Many small magnetic reconnection events may be the underlying cause. Using the eclipse to help us map out the region in X-rays will give us a unique data set to help test this theory."

NuSTAR is a Small Explorer mission led by Caltech and managed by NASA's Jet Propulsion Laboratory for NASA's Science Mission Directorate in Washington.