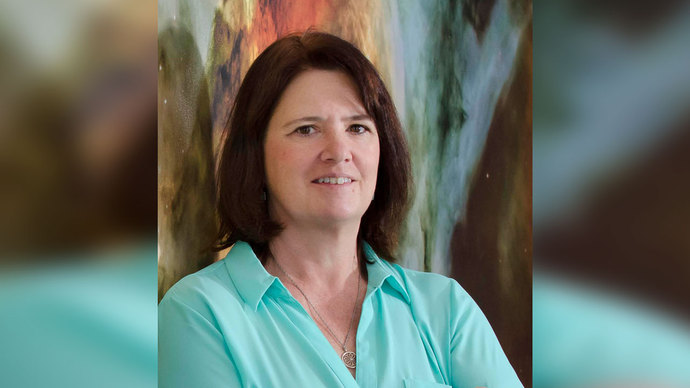 Fiona Harrison is the principal investigator of NASA's NuSTAR mission, based at Caltech. Credit: Caltech

Fiona Harrison, principal investigator of NASA's NuSTAR (Nuclear Spectroscopic Telescope Array) mission, has been selected to receive the 2016 Massey Award, given by the Committee on Space Research (COSPAR).

The Massey Award honors "outstanding contributions to the development of space research in which a leadership role is of particular importance" and honors the memory of Sir Harrie Massey.

"It has been great to work with such a strong and talented team on NuSTAR," said Harrison, a professor of astronomy at Caltech. "The whole team deserves credit in NuSTAR's success."

NuSTAR launched in June 2012, opening a new window to the universe as the first focusing telescope to operate in a high-frequency band of X-rays called hard X-rays.

Among NuSTAR's accomplishments so far, the observatory created the first map of radioactive material in a supernova remnant. The remnant, called Cassiopeia A, is the blown out pieces of an exploded star, which produced traces of the radioactive isotope titanium-44. NuSTAR also detected this substance in the remnant of supernova 1987A in the Large Magellanic Cloud. Such research shows how shock waves likely rip apart large dying stars.

The NuSTAR team also discovered emission from a special type of neutron star called a magnetar, which has an extremely strong magnetic field. This object was the first pulsar -- a dead stellar remnant that emits beams of radiation as it spins -- discovered near the black hole at the center of the Milky Way.

Additionally, astronomers used NuSTAR data to find the brightest pulsar ever recorded. This astonishing object has helped astronomers refine their theories about sources of blinding X-rays called ultraluminous X-ray sources (ULXs). Most scientists believed that these sources were black holes more than 1,000 times the mass of our sun. But NuSTAR found that one such source, the extremely bright Messier 82, is actually a pulsar, not a black hole.

"These and many other discoveries make Fiona Harrison one of the most active leaders of modern high energy astrophysics," the award citation notes.

Harrison has been the principal investigator since the mission was founded in 2005. After earning a doctoral degree in physics at the University of California, Berkeley, she first came to Caltech in 1993 as a research fellow. She began her professorial career at Caltech in 1995, and is currently the Benjamin M. Rosen Professor of Physics and Kent and Joyce Kresa Leadership Chair of the Division of Physics, Mathematics and Astronomy there.

The mission will continue to allow astronomers to explore such topics as the evolution of massive black holes, the deaths of stars and the creation of heavy elements in supernova explosions.