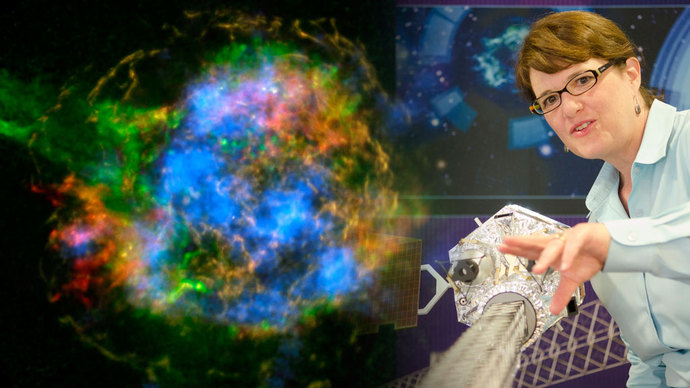 The 2015 Rossi Prize has been awarded to Fiona Harrison, a professor at the California Institute of Technology in Pasadena, California, for her "groundbreaking work on supernova remnants, neutron stars and black holes enabled by NuSTAR." NuSTAR is NASA's Nuclear Spectroscopic Telescope Array mission. The award, granted by the American Astronomical Society's High Energy Astrophysics Division (HEAD), is the top prize in high-energy astrophysics.

Harrison is the principal investigator of NuSTAR, launched in June 2012 under NASA's Small Explorer program. It is the most powerful high-energy X-ray telescope ever developed. By focusing high-energy X-rays, NuSTAR is able to study some of the hottest, densest and most energetic phenomena in the universe, including black holes, collapsed stars and supernovae remnants. NuSTAR is conducting a census of the black holes in our cosmic neighborhood, examining the origins of high-energy particles in active galaxies, and mapping the remains of supernovae to better understand how stars explode and chemical elements are formed.

The citation for the Rossi Prize notes that Harrison's "assembly and leadership of the extraordinary NuSTAR team has opened a new window on the Universe."

"The exciting scientific results from NuSTAR are the culmination of close to two decades of work by a talented and dedicated team," said Harrison. "It is a privilege to work with them, and an honor to be recognized through the Rossi Prize."