NuSTAR to Drop From Plane and Rocket Into Space 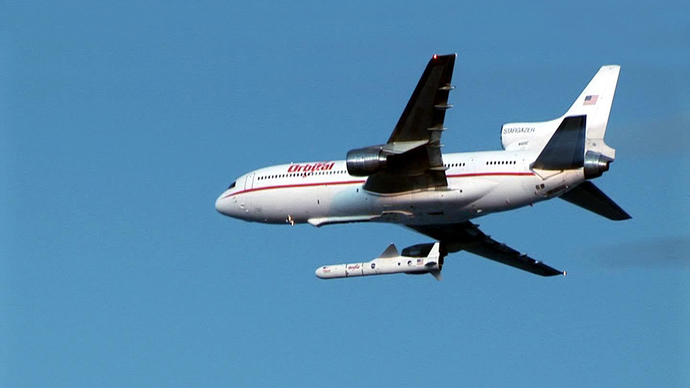 NASA's NuSTAR mission is scheduled to launch from Kwajalein Atoll in the central Pacific Ocean on June 13, no earlier than 8:30 a.m. PDT (11:30 a.m. EDT). The observatory, which will hunt for black holes and other exotic objects using specialized X-ray eyes, will be launched from a Pegasus XL rocket carried by an Orbital Science Corporation L-1011 "Stargazer" plane. The plane will take off from Kwajalein Atoll an hour before launch, flying out over the Pacific Ocean.

About five seconds before launch, the Pegasus XL rocket -- also from Orbital -- will drop from the plane, ignite and propel NuSTAR to space.

Why launch from the air? Plane-assisted launches are less expensive than those that take place from the ground. Less fuel is needed to boost cargo away from the pull of Earth's gravity. NuSTAR is part of NASA's Small Explorer program, which builds focused science missions at relatively low costs.

If all goes as planned, the following milestones will occur on June 13. Times listed are for a launch at the start of a four-hour window.

The Stargazer carrier aircraft, with the Pegasus launch vehicle and NuSTAR spacecraft strapped to its belly, will take off from Kwajalein's Bucholz Auxiliary Airfield an hour before launch, and climb to an altitude of about 39,000 feet (11,900 meters). This should occur around 7:30 a.m. PDT (10:30 a.m. EDT).

The carrier aircraft will release the Pegasus rocket at 8:30 a.m. PDT (11:30 a.m. EDT). The rocket will free-fall for about five seconds before igniting.

While the second stage is burning, pyrotechnic devices will be fired to release the nose cone, or fairing, that encapsulates the observatory. NuSTAR will be exposed to space for the first time. This event is scheduled to occur around 8:33 a.m. PDT (11:33 a.m. EDT).

Separating From the Rocket

At about 8:43 a.m. PDT (11:43 a.m. EDT), 13 minutes after the initial release from the Stargazer, NuSTAR will separate from the Pegasus rocket's third stage. At this point, NuSTAR will be in its final orbit -- a low-Earth equatorial orbit at an altitude of approximately 340 miles (600 kilometers) and an inclination of six degrees.

When NuSTAR separates from the Pegasus, the satellite's system that controls its orientation in space, or "attitude," will begin to stabilize it, and the spacecraft solar arrays will be deployed. Around this time, its first signal will be received on the ground via NASA's Tracking and Data Relay Satellite System. Over the following week, NuSTAR personnel will perform a series of checkouts to ensure that all spacecraft subsystems are operating nominally.

Roughly one week after launch, engineers will command NuSTAR to deploy its lengthy 33-foot (10-meter) boom, allowing the telescope to focus X-ray light into crisp images. Unlike visible-light telescopes, X-ray telescopes require a long distance between the mirrors and detectors to focus the light. It's a bit like wearing glasses a few feet away from your face.

Science operations are expected to begin about 30 days after launch.