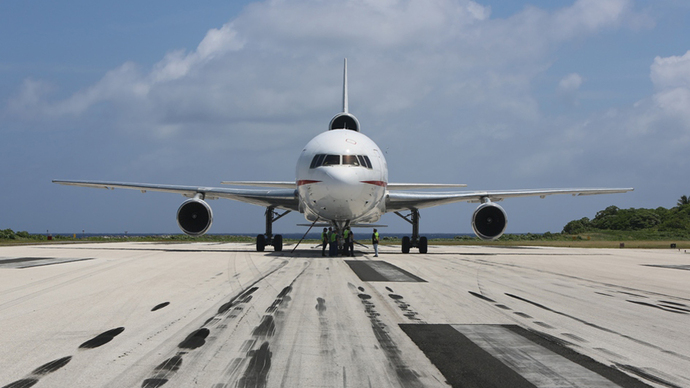 The plane that will carry NASA's Nuclear Spectroscopic Telescope Array(NuSTAR) and its rocket to their airborne launch site arrives at Kwajalein Atoll, a coral island located midway between Hawaii and Australia. Image credit: Orbital Sciences Corporation

NASA's Nuclear Spectroscopic Telescope Array, or NuSTAR, and its rocket flew above the palm trees to arrive at their launch location at the U.S. Army's Reagan test site at Kwajalein Atoll. Kwajalein, located midway between Hawaii and Australia, is one of the world's largest atolls -- coral islands with lagoons in the middle. The mission is scheduled to launch June 13 no earlier than 8:30 a.m. PDT (11:30 a.m. EDT).

Currently, NuSTAR is tucked into the top of the rocket, a Pegasus XL from Orbital Sciences Corporation, which is strapped to the bottom of a carrier plane, the L-1011 "Stargazer," also from Orbital.

About an hour before launch, NuSTAR and its rocket will be flown out over the Pacific Ocean and dropped. Five seconds later, the rocket will ignite and boost NuSTAR into its final orbit around Earth's equator. A video showing a previous Pegasus launch is online at http://www.nasa.gov/multimedia/videogallery/index.html?collection_id=80521 .