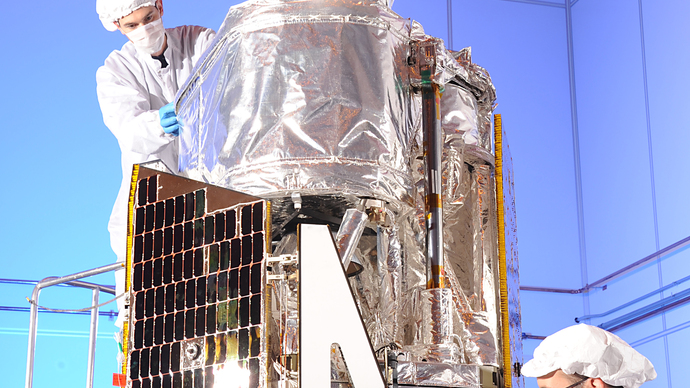 The NuSTAR spacecraft undergoes preparations by technicians before it is connected to the Pegasus rocket slated to carry it into orbit. Photo credit: VAFB/Randy Beaudoin

NASA's next observatory is about the size of a refrigerator, but it is expected to uncover some of the most powerful structures in the universe.

The Nuclear Spectroscopic Telescope Array, called NuSTAR, is to launch June 13 aboard an Orbital Sciences Pegasus rocket from the Reagan Test Site at Kwajalein Atoll in the Pacific Ocean.

It will be the first spacecraft able to focus high-energy x-rays, the same kind of x-rays dentists use to penetrate teeth. Researchers say the instrument represents a huge advance in what they will be able to see in space.

"We are going to open up the high-energy window on the universe," said Daniel Stern, project scientist for NuSTAR. "It's going to teach us a lot about the universe, from what heats the atmosphere of the sun to understanding black holes."

NuSTAR's unprecedented sensitivity results from the fact that it will be the first focusing high energy X-ray telescope in space. This will enable NuSTAR to study black holes hidden behind dust and gas in galaxies, and also observe some of the most energetic objects. Teaming with other observatories like XMM-Newton NuSTAR will see the regions close to very massive black holes, measuring how fast they spin

"We think two out of every three black holes in the universe are hidden," Stern said.

NuSTAR will not leave Earth orbit as it looks out on the universe. It will ride aboard a winged Pegasus rocket to an orbit close to the equator and extend a solar array for power.

"Compared to a Juno or an MSL (Mars Science Laboratory), it's not very big. It's about 775 pounds, about the size of a refrigerator," said Garrett Skrobot, NuSTAR's mission manager for LSP. "But it only has one basic instrument on the spacecraft itself whereas the other spacecraft have multiple instruments on them."

After about a week in space, it will extend a 33-foot-long span with sensors at one end that will focus the x-rays the spacecraft sees.

The span is similar to the one extended during space shuttle mission STS-99 for the Shuttle Radar Topography Mission.

NASA opted to launch the spacecraft from Kwajalein because the horseshoe-shaped island is close to the equator. A launch team from NASA's Launch Services Program will head to the Pacific atoll about a week ahead of launch and return after NuSTAR is in orbit.

The Pegasus is NASA's only rocket that launches from an airplane, a modified L-1011 aircraft called Stargazer.

"Pegasus is our most unique rocket, period," said Omar Baez, launch director for NASA's Launch Services Program, or LSP. "First off, it has a wing. The way we launch it is we drop it like a weapon or a bomb and a few seconds later this thing lights off and scoots in front of the L-1011. It's unique in all kinds of aspects."

The airliner flies a racetrack pattern as the countdown timed to coincide with the moment the aircraft is in the right position.

"Your launch pad is moving at 500 mph, so that puts us in a critical timing situation," Baez said. "You've got to be at the right place, the right point, at the right time and everything's got to mesh to be able to do that correctly. This is one of our most challenging types of missions, but it's also more fun because of that."

Kwajalein is one of five launch sites LSP uses. Cape Canaveral Air Force Station in Florida, Vandenberg Air Force Base in California, Kodiak Launch Complex in Alaska, and Wallops Fight Facility in Virginia are the others. LSP is based at NASA's Kennedy Space Center in Florida.

"It's a very tight community there in Kwajalein," Baez said. "These folks are basically 3,000 miles removed from any conventional civilization. But it's also in the south Pacific, so it's a very nice place to be. I it's as close to what you'd imagine an island in the Pacific is."

By teaming with NASA's Chandra and Fermi missions, observing cosmic objects simultaneously, astronomers will have incredibly powerful new ways of understanding some of the hottest, densest and most energetic phenomena in the Universe.

"We have planned observations of things we're safely sure we're going to see," Stern said, "but the big excitement is we might see things that are unexpected."