NuSTAR Strapped to its Plane 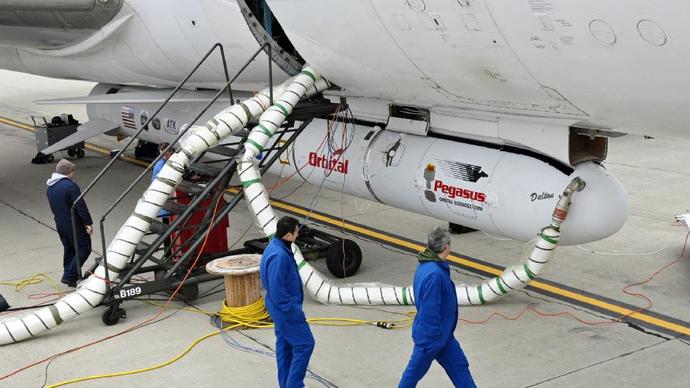 NASA's Nuclear Spectroscopic Telescope Array, or NuSTAR, is now perched atop its Pegasus XL rocket, strapped to the plane that will carry the mission to an airborne launch. Launch is scheduled for June 13, no earlier than 8:30 a.m. PDT (11:30 a.m. EDT).

The plane -- the L-1011 "Stargazer" aircraft -- is now at Vandenberg Air Force Base in central California. It is scheduled to fly to Kwajalein Atoll in the central Pacific Ocean from June 5 to 6. About an hour before launch, the plane will lift off from the island, and drop NuSTAR and its rocket over the ocean. The rocket will then ignite, carrying NuSTAR to its final orbit around Earth's equator.

NuSTAR will be the first space telescope to create sharp images of X-rays with high energies, similar to those used by doctors and dentists. It will conduct a census for black holes, map radioactive material in young supernovae remnants, and study the origins of cosmic rays and extreme physics around collapsed stars.