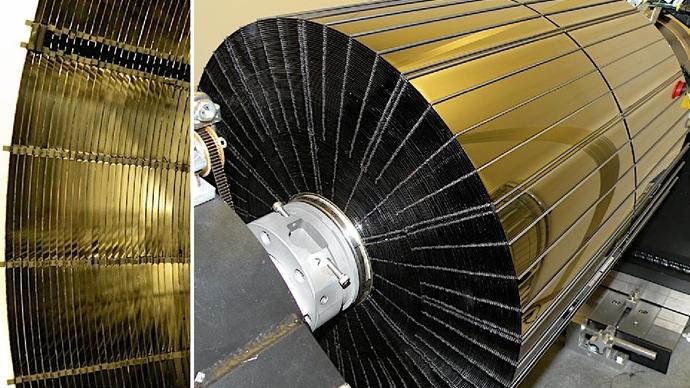 NASA's Nuclear Spectroscopic Telescope Array, or NuSTAR, has a complex set of mirrors, or optics, that will help it see high-energy X-ray light in greater detail than ever before. Image credit: NASA/JPL-Caltech

PASADENA, Calif. -- NASA's Nuclear Spectroscopic Telescope Array, or NuSTAR, is being prepared for the final journey to its launch pad on Kwajalein Atoll in the central Pacific Ocean. The mission will study everything from massive black holes to our own sun. It is scheduled to launch no earlier than June 13.

"We will see the hottest, densest and most energetic objects with a fundamentally new, high-energy X-ray telescope that can obtain much deeper and crisper images than before," said Fiona Harrison, the NuSTAR principal investigator at the California Institute of Technology in Pasadena, Calif., who first conceived of the mission 20 years ago.

The observatory is perched atop an Orbital Sciences Corporation Pegasus XL rocket. If the mission passes its Flight Readiness Review on June 1, the rocket will be strapped to the bottom of an aircraft, the L-1011 Stargazer, also operated by Orbital, on June 2. The Stargazer is scheduled to fly from Vandenberg Air Force Base in central California to Kwajalein on June 5 to 6.

After taking off on launch day, the Stargazer will drop the rocket around 8:30 a.m. PDT (11:30 a.m. EDT). The rocket will then ignite and carry NuSTAR to a low orbit around Earth.

"NuSTAR uses several innovations for its unprecedented imaging capability and was made possible by many partners," said Yunjin Kim, the project manager for the mission at NASA's Jet Propulsion Laboratory in Pasadena, Calif. "We're all really excited to see the fruition of our work begin its mission in space."

NuSTAR will be the first space telescope to create focused images of cosmic X-rays with the highest energies. These are the same types of X-rays that doctors use to see your bones and airports use to scan your bags. The telescope will have more than 10 times the resolution and more than 100 times the sensitivity of its predecessors while operating in a similar energy range.

The mission will work with other telescopes in space now, including NASA's Chandra X-ray Observatory, which observes lower-energy X-rays. Together, they will provide a more complete picture of the most energetic and exotic objects in space, such as black holes, dead stars and jets traveling near the speed of light.

"NuSTAR truly demonstrates the value that NASA's research and development programs provide in advancing the nation's science agenda," said Paul Hertz, NASA's Astrophysics Division director. "Taking just over four years from receiving the project go-ahead to launch, this low-cost Explorer mission will use new mirror and detector technology that was developed in NASA's basic research program and tested in NASA's scientific ballooning program. The result of these modest investments is a small space telescope that will provide world-class science in an important but relatively unexplored band of the electromagnetic spectrum."

NuSTAR will study black holes that are big and small, far and near, answering questions about the formation and physics behind these wonders of the cosmos. The observatory will also investigate how exploding stars forge the elements that make up planets and people, and it will even study our own sun's atmosphere.

The observatory is able to focus the high-energy X-ray light into sharp images because of a complex, innovative telescope design. High-energy light is difficult to focus because it only reflects off mirrors when hitting at nearly parallel angles. NuSTAR solves this problem with nested shells of mirrors. It has the most nested shells ever used in a space telescope: 133 in each of two optic units. The mirrors were molded from ultra-thin glass similar to that found in laptop screens and glazed with even thinner layers of reflective coating.

The telescope also consists of state-of-the-art detectors and a lengthy 33-foot (10-meter) mast, which connects the detectors to the nested mirrors, providing the long distance required to focus the X-rays. This mast is folded up into a canister small enough to fit atop the Pegasus launch vehicle. It will unfurl about seven days after launch. About 23 days later, science operations will begin.

NuSTAR is a Small Explorer mission led by Caltech and managed by JPL for NASA's Science Mission Directorate in Washington. The spacecraft was built by Orbital Sciences Corporation in Dulles, Va. Its instrument was built by a consortium including Caltech; JPL; University of California at Berkeley (UC Berkeley); Columbia University in New York; NASA's Goddard Space Flight Center in Greenbelt, Md.; the Danish Technical University in Denmark; Lawrence Livermore National Laboratory in Livermore, Calif.; and ATK Aerospace Systems in Goleta, Calif. NuSTAR will be operated by UC Berkeley, with the Italian Space Agency providing its equatorial ground station located at Malindi, Kenya. The mission's outreach program is based at Sonoma State University in Rohnert Park, Calif. NASA's Explorer Program is managed by Goddard. JPL is managed by Caltech for NASA.