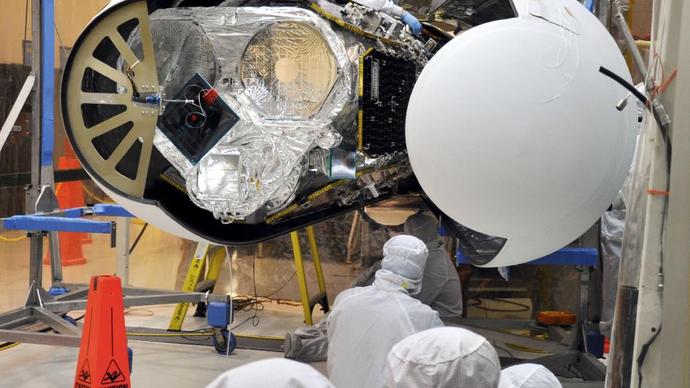 An Orbital Sciences technician completes final checks of NASA's Nuclear Spectroscopic Telescope Array, or NuSTAR, inside the Orbital Sciences processing facility at Vandenberg Air Force Base in California before the Pegasus payload fairing is secured around it. Image credit: NASA

Technicians at Vandenberg Air Force Base in central California are placing the two halves of the rocket nose cone, or fairing, around NASA's Nuclear Spectroscopic Telescope Array (NuSTAR), in preparation for its launch. The launch is scheduled for no earlier than March 21.

The fairing will hold the observatory safely in place atop its Orbital Sciences Corporation rocket, a Pegasus XL. The rocket will blast off from the L-1011 "Stargazer" aircraft, also from Orbital, near Kwajalein Atoll in the central Pacific Ocean. During its ride to space, the fairing will split open like a clamshell, exposing NuSTAR before it is ultimately carried to its final orbit around Earth.

The fairing installation is a two-day process scheduled to be completed on Saturday, March 3.

NuSTAR will study everything from our sun to massive black holes buried in the hearts of galaxies. It will be the first space telescope to capture sharp images in high-energy X-rays, giving astronomers a new tool for understanding the most energetic objects and events in our universe.

NuSTAR is a Small Explorer mission led by the California Institute of Technology and managed by NASA's Jet Propulsion Laboratory, both in Pasadena, Calif., for NASA's Science Mission Directorate. The spacecraft was built by Orbital Sciences Corporation, Dulles, Va. Its instrument was built by a consortium including Caltech; JPL; the University of California, Berkeley; Columbia University, New York; NASA's Goddard Space Flight Center in Greenbelt, Md.; the Danish Technical University in Denmark; Lawrence Livermore National Laboratory, Calif.; and ATK Aerospace Systems, Goleta, Calif. NuSTAR will be operated by UC Berkeley, with the Italian Space Agency providing its equatorial ground station located at Malindi, Kenya. The mission's outreach program is based at Sonoma State University, Calif. NASA's Explorer Program is managed by Goddard. JPL is managed by Caltech for NASA.