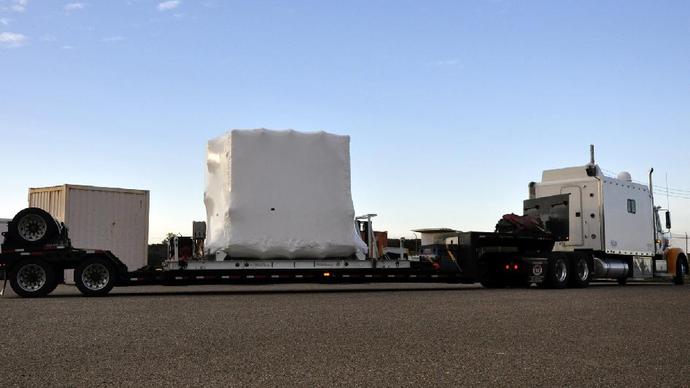 NASA's Nuclear Spectroscopic Telescope Array, or NuSTAR, mission arrived at Vandenberg Air Force Base in California this morning after a cross-country trip by truck from the Orbital Sciences Corporation's manufacturing plant in Dulles, Va. The mission is scheduled to launch from Kwajalein Atoll in the Pacific Ocean on March 14.

Once the observatory is offloaded at Vandenberg, it will be moved into a processing hangar, joining the Pegasus XL rocket that is set to carry it to space. Over the weekend, technicians will remove its shipping container so that checkout and other processing activities can begin next week. Once the observatory is integrated with the rocket in mid-February, technicians will encapsulate it in the vehicle fairing, which is also scheduled to arrive at Vandenberg today.

After processing is completed, the rocket and spacecraft will be flown on Orbital's L-1011 carrier aircraft to the Ronald Reagan Ballistic Missile Defense Test Site at Kwajalein Atoll for launch in March.

NuSTAR is a small-explorer mission managed by NASA's Jet Propulsion Laboratory, Pasadena, Calif., for NASA's Science Mission Directorate in Washington The spacecraft was built by Orbital Sciences Corporation. Its instrument was built by a consortium including the California Institute of Technology, Pasadena; JPL; Columbia University, New York, N.Y.; NASA's Goddard Space Flight Center, Greenbelt, Md.; the Danish Technical University in Denmark; the University of California, Berkeley; and ATK, Goleta, Calif. NuSTAR will be operated by UC Berkeley, with the Italian Space Agency providing its equatorial ground station located at Malindi, Kenya. The mission's outreach program is based at Sonoma State University, Calif. NASA's Explorer Program is managed by Goddard. JPL is managed by Caltech for NASA.