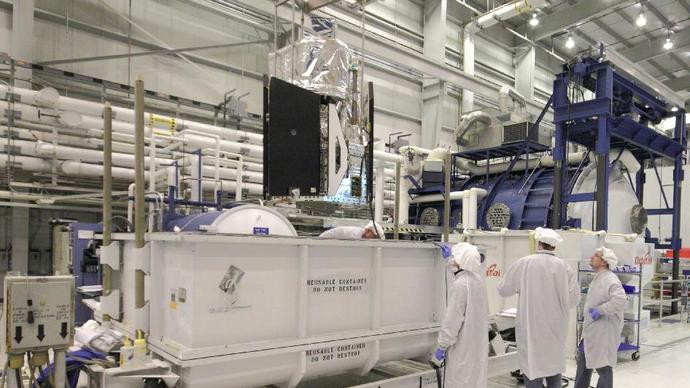 PASADENA, Calif. -- NASA's Nuclear Spectroscopic Telescope Array, or NuSTAR, shipped to Vandenberg Air Force Base, Calif., on Tuesday, to be mated to its Pegasus launch vehicle. The observatory will detect X-rays from objects ranging from our sun to giant black holes billions of light-years away. It is scheduled to launch March 14 from an aircraft operating out of Kwajalein Atoll in the Marshall Islands.

"The NuSTAR mission is unique because it will be the first NASA mission to focus X-rays in the high-energy range, creating the most detailed images ever taken in this slice of the electromagnetic spectrum," said Fiona Harrison, the mission's principal investigator at the California Institute of Technology in Pasadena, Calif.

The observatory shipped from Orbital Sciences Corporation in Dulles, Va., where the spacecraft and science instrument were integrated. It is scheduled to arrive at Vandenberg on Jan. 27, where it will be mated to the Pegasus, also built by Orbital, on Feb. 17.

The mission will be launched from the L-1011 "Stargazer" aircraft, which will take off near the equator from Kwajalein Atoll in the Pacific. NuSTAR and its Pegasus will fly from Vandenberg to Kwajalein attached to the underside of the L-1011, and are scheduled to arrive on March 7.

On launch day, after the airplane arrives at the planned drop site over the ocean, the Pegaus will drop from the L-1011 and carry NuSTAR to an orbit around Earth.

NuSTAR's advanced telescope consists of two sets of 133 concentric shells of mirrors, which were shaped from flexible glass similar to that found in laptop screens. Because X-rays require large focusing distances, or focal lengths, the telescope has a lengthy 33-foot (10-meter) mast, which will unfold a week after launch.

These and other advances in technology will enable NuSTAR to explore the cosmic world of high-energy X-rays with much improved sensitivity and resolution over previous missions. During its two-year primary mission, NuSTAR will map the celestial sky in X-rays, surveying black holes, mapping supernova remnants, and studying particle jets travelling away from black holes near the speed of light.

NuSTAR also will probe the sun, looking for microflares theorized to be on the surface that could explain how the sun's million-degree corona, or atmosphere, is heated. It will even test a theory of dark matter, the mysterious substance making up about one-quarter of our universe, by searching the sun for evidence of a hypothesized dark matter particle.

"NuSTAR will provide an unprecedented capability to discover and study some of the most exotic objects in the universe, from the corpses of exploded stars in the Milky Way to supermassive black holes residing in the hearts of distant galaxies," said Lou Kaluzienski, NuSTAR program scientist at NASA Headquarters in Washington.

NuSTAR is a small-explorer mission managed by JPL for NASA's Science Mission Directorate. The spacecraft was built by Orbital Sciences Corporation. Its instrument was built by a consortium including Caltech, JPL, Columbia University, New York, N.Y., NASA's Goddard Space Flight Center in Greenbelt, Md., the Danish Technical University in Denmark, the University of California, Berkeley, and ATK-Goleta. NuSTAR will be operated by U.C. Berkeley, with the Italian Space Agency providing its equatorial ground station located at Malindi, Kenya. NASA's Explorer Program is managed by Goddard. JPL is managed by Caltech for NASA.