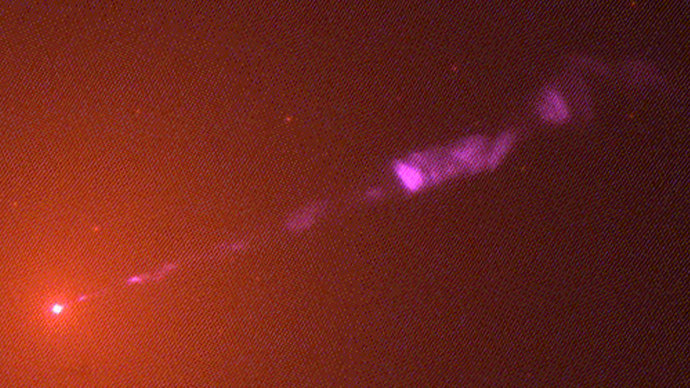 PASADENA, Calif. -- NASA has made a decision to restart an astronomy mission that will have greater capability than any existing instrument for detecting black holes in the local universe.

The Nuclear Spectroscopic Telescope Array, or NuSTAR, is managed by JPL. It will expand our understanding of the origins and destinies of stars and galaxies. NASA had stopped the study effort on the mission in 2006 due to funding pressures within the Science Mission Directorate.

"We are very excited to be able restart the NuSTAR mission, which we expect to be launched in 2011," said Alan Stern, associate administrator for the Science Mission Directorate at NASA Headquarters in Washington. "NuSTAR has more than 500 times the sensitivity of previous instruments that detect black holes. It's a great opportunity for us to explore an important astronomical frontier. We are getting more and more from the science budget we have, and the restart of the highly-valued NuSTAR mission is an example of that."

The mission will bridge the gap between the 2009 launch of the Wide-field Infrared Survey Explorer and the 2013 launch of the James Webb Space Telescope. The spacecraft will map areas of the sky in the light of high-energy X-rays and complement astrophysics missions that explore the cosmos in other regions of the electromagnetic spectrum.

"NuSTAR will perform deep observations in hard X-rays to detect black holes of all sizes and other exotic phenomena," said Jon Morse, director of the Astrophysics Division at NASA Headquarters. "It will perform cutting-edge science using advanced technologies and help to provide a balance between small and large missions in the NASA astrophysics portfolio."

The mission is a part of NASA's Explorer Program. The program provides frequent, low-cost access to space for missions with small- to mid-sized spacecraft. The Nuclear Spectroscopic Telescope Array originally was selected from proposals submitted in response to an announcement of opportunity in 2003. Fiona Harrison of the California Institute of Technology, Pasadena, is the mission's principal investigator. JPL is a division of Caltech.

NASA expects to select three additional Small Explorer missions for flight in the first half of the next decade through a competitive selection within the astrophysics and heliophysics scientific communities.