NuSTAR is Working with IXPE to Reveal the Shape, Orientation of Hot Matter Around Black Hole 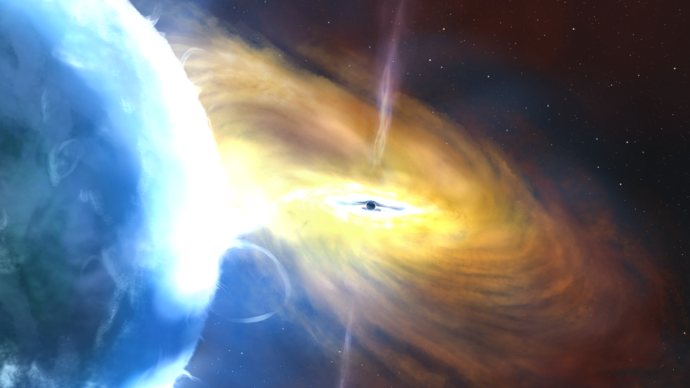 This illustration shows the Cygnus X-1 system, located more than 6,000 light-years from Earth. The black hole is shown at the center and its companion star is depicted on the left. The immense gravity of the black hole pulls material off the star, forming a disk called an “accretion disk” around the black hole. Credits: John Paice

Cygnus X-1, discovered in 1964, was the first cosmic object ever identified as containing a black hole. Now, NASA telescopes have teamed up to reveal new details about the configuration of hot matter surrounding this famous black hole.

In a new study published in the journal Science, astronomers using NASA’s Imaging X-Ray Polarimetry Explorer (IXPE) mission data found that the flow of matter toward the black hole’s disk is more edge on than previously thought, meaning the edge of the disk would be pointed more toward Earth than expected.

IXPE, an international collaboration between NASA and the Italian Space Agency (ASI), has the special ability look at the polarization of X-ray light. Polarization is a property of light that tells us about the interconnected electric and magnetic fields that make up all wavelengths of light. The orientation and organization of these fields gives scientists valuable information about extreme objects like Cygnus X-1, such as how particles are accelerated around them.

One of the brightest X-ray sources in our galaxy, Cygnus X-1 has a black hole weighing 21 times the mass of the Sun. The black hole is in orbit with a companion star weighing the equivalent of 41 Suns.

Matter is heated to millions of degrees as it is pulled toward the black hole. This hot matter glows in X-rays. Researchers are using measurements of the polarization of these X-rays to test and refine models that describe how black holes swallow matter, becoming some of the most luminous sources of light — including X-rays — in the universe.

“Previous X-ray observations of black holes only measured the arrival direction, arrival time, and energy of the X-rays from hot plasma spiraling toward the black holes,” said lead author Henric Krawczynski, professor of physics at Washington University in St. Louis and a faculty fellow in the university’s McDonnell Center for the Space Sciences. “IXPE also measures their linear polarization, which carries information about how the X-rays were emitted — and if, and where, they scatter off material close to the black hole.”

The scientists noted that a better understanding of the geometry of the plasma around a black hole can reveal much about the inner workings of black holes and how they accrete mass.

IXPE observed Cygnus X-1 from May 15 to May 21, 2022. Combining the IXPE data with concurrent observations from NASA’s Neutron star Interior Composition Explorer (NICER) and Nuclear Spectroscopic Telescope Array (NuSTAR) observatories and other facilities in May and June 2022 allowed the authors to constrain the geometry — that is, the shape and location — of the plasma.

The researchers found that the plasma extends perpendicular to a two-sided, pencil-shaped plasma outflow, or jet, imaged in earlier radio observations. The alignment of the direction of the X-ray polarization and the jet lends strong support to the hypothesis that the processes in the bright region close to the black hole play a crucial role in launching the jet.

The observations match models predicting that the ring of hot plasma, called the “corona,” either sandwiches the disk of matter spiraling toward the black hole or replaces the inner portion of that disk. The new polarization data rule out models in which the black hole’s corona is a narrow plasma column or cone along the jet axis.

“The IXPE mission uses X-ray mirrors fabricated at NASA’s Marshall Space Flight Center and focal plane instrumentation provided by a collaboration of ASI, the National Institute for Astrophysics (INAF), and the National Institute for Nuclear Physics,” said co-author Fabio Muleri of INAF-IAPS. “Beyond Cygnus X-1, IXPE is being used to study a wide range of extreme X-ray sources, including mass-accreting neutron stars, pulsars and pulsar wind nebulae, supernova remnants, our galactic center, and active galactic nuclei. We’ve found a lot of surprises, and we’re having a lot of fun.”

Over the coming weeks, NuSTAR is supporting a number of additiona IXPE observations of a range of sources to explore this exciting new measurement of the polarized light coming from black holes and neutron stars. Here, NuSTAR observations were crucial to accurately measure the total flux emitted by different regions, such as the corona, the disk, and the reflected components. This allowed scientists to rule out polarization produced by the reprocessing of X-rays in the accretion disk, rather than by electron scattering in an equatorial corona, the leading interpretation of these observations.

NuSTAR launched on June 13, 2012. A Small Explorer mission led by Caltech and managed by JPL for NASA's Science Mission Directorate in Washington, it was developed in partnership with the Danish Technical University and the Italian Space Agency (ASI). The telescope optics were built by Columbia University; NASA’s Goddard Space Flight Center in Greenbelt, Maryland, and DTU. The spacecraft was built by Orbital Sciences Corp. in Dulles, Virginia. NuSTAR’s mission operations center is at the University of California, Berkeley, and the official data archive is at NASA’s High Energy Astrophysics Science Archive Research Center. ASI provides the mission’s ground station and a mirror data archive. Caltech manages JPL for NASA.