Black holes can tell us the expansion rate of the Universe 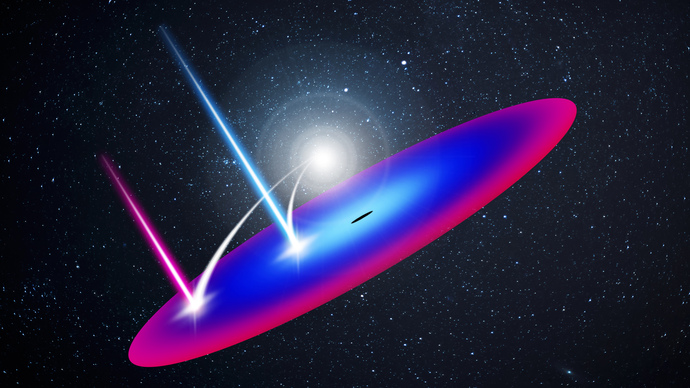 Astronomers have  discovered a new way to determine the current expansion rate of the Universe, known as the Hubble constant. A paper recently on the arXiv, and accepted for publication in the Monthly Notices of the Royal Astronomical Society, describes a method to use X-ray observations of supermassive black holes at the centre of distant galaxies that are gobbling up huge amounts of gas, known as active galactic nuclei. This could settle an on-going dispute between the two existing methods, which disagree on the age of the Universe by more than a billion years.

The Universe began with the Big Bang and has been expanding ever since, but not at a constant rate. The Hubble constant is today's expansion rate. Since every point in the Universe is moving away from every other point, more distant galaxies move away from each other more rapidly. Think of dots drawn onto a balloon moving away from each other as the balloon inflates. We can measure the speed that other galaxies are moving away from us quite easily from the redshift of their light, but measuring the distance to galaxies is very difficult. The traditional method is to look for supernova explosions of a particular variety. Since these supernovae shine at a known brightness, the distance can be inferred from how faint they appear to be on Earth. The other standard method to measure the Hubble constant is completely different: it involves theoretical modelling of the radiation afterglow of the Big Bang. The problem is that the supernovae indicate that the Universe is expanding faster than the modelling of the afterglow radiation does. The expansion can be extrapolated backwards in time to work out when the Universe began. The supernovae imply that this was less than 13 billion years ago, whereas the Big Bang afterglow modelling implies it was nearly 14 billion years ago!

Something has to give. It could simply be that the supernovae actually shine a little brighter than is currently thought, and only appear to be so faint because they are more distant. Or it could be that the standard cosmological model for the Universe is missing an important piece of physics. New methods of measuring the Hubble constant are vital to decide between these two eventualities.

Today's paper shows that we can measure the Hubble constant by determining the distance to supermassive black holes. In the active galactic nuclei harbouring them, material spirals in a disc towards the black hole. Very close to the black hole, the material becomes so hot that it glows extremely brightly in X-rays. These X-rays shine on the rest of the disc, and heat it. The new study has developed a way to measure the temperature of the disc, thereby using it as a sensor to measure the true brightness of the X-ray emitting region. Once we know the true brightness, we can measure the distance from how faint the X-rays appear from Earth.

The authors show that the huge amounts of data already collected by two orbiting X-ray observatories, the European Space Agency's XMM-Newton and NASA's NuSTAR, can be re-used to measure the Hubble constant with enough precision to decide which of the two methods has it right. It is the combination of these two telescopes that enables the disc temperature measurement. NuSTAR detects the higher energy X-rays that scattered off free electrons in the disc and XMM detects the lower energy X-rays that were absorbed and re-emitted by atoms in the disc. The disc temperature can be inferred by comparing these two processes. NuSTAR is also vital because it is very well calibrated: X-ray telescopes work by counting how many X-ray photons hit the detector, but some photons just pass straight through the detector without being counted. The NuSTAR detectors are very well understood, meaning that we know what fraction of the X-ray photons pass through them more accurately than for any other currently active X-ray observatory. This enables us to work out how dim the X-ray signal from each distant black hole really is.

Lead-author, Dr Adam Ingram, comments: "Because our new method is completely independent from all the others, it gives us a way to determine whether or not a new theory is needed to explain the history of the Universe. The work begins now to actually make the measurement by analysing all of these observations”.

More details can be found in the paper published in the Monthly Notices of the Royal Astronomical Society: https://academic.oup.com/mnras/article/509/1/619/6400123