NuSTAR Observes the Sun with MaGIXS 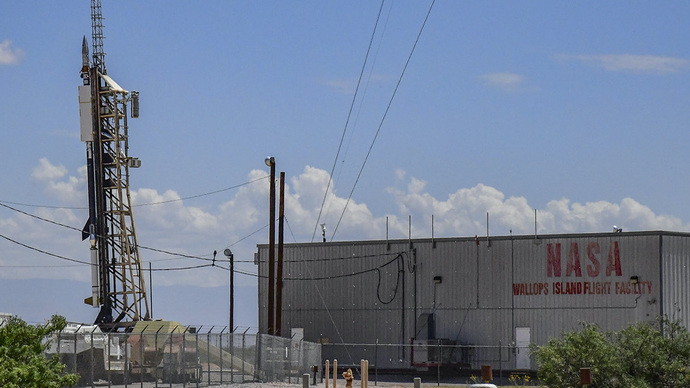 The Marshall Grazing Incidence X-ray Spectrometer (MaGIXS) on the launch pad at the White Sands Missile Range in New Mexico, prior to its launch at 11:20 am PDT on July 30. MaGIXS is a NASA sounding rocket instrument designed to study the Sun at low-energy X-rays (0.5-2 keV), with the goal of probing the high-temperature solar coronal plasma and providing insight into the nature of coronal heating. NuSTAR supported the MaGIXS flight with coordinated observations of the Sun at high-energy X-rays (3-80 keV). Image credit: NASA/MaGIXS

A major gap, explained Amy Winebarger, a heliophysicist at NASA's Marshall Space Flight Center in Huntsville, Alabama and principal investigator for the MaGIXS mission, is understanding how this occurs. Is there a constant series of small internal solar explosions, or is there a periodic rise and fall in the heating process? Scientists primarily consider two possible scenarios. The first is tied to nanoflares, relatively small coronal heating events which may cause the magnetic field lines on the Sun’s surface to tangle and coil up like spaghetti in a boiling pot of water, sporadically superheating regions of the corona. The second possibility is wave heating, a near-constant internal solar agitation similar to that of a washing machine, which sends waves of energy up to the surface, where they’re expelled to heat the corona.

Effectively plumbing this turbulent solar region requires X-ray observations.  Specifically, MaGIXS is a sophisticated soft, or low-energy (0.5-2 keV) X-ray imaging spectrometer that launched on a NASA sounding rocket for a brief, suborbital flight to study the Sun, and NuSTAR obtained coordinated hard, or high-energy (3-80 keV) X-ray observations of the Sun with its pair of co-aligned imaging spectrometers.  "The soft X-ray range of MaGIXS is highly complementary to the hard X-ray range of NuSTAR," explained Lindsay Glesener, a heliophysicist at the University of Minnesota and member of the MaGIXS science team.  "Specifically, MaGIXS measures hot emission lines from solar active regions that are indicative of whether nanoflares are heating the corona (or not), and NuSTAR measures continuum from that same hot plasma."

Previous soft X-ray missions have only observed the Sun’s corona with less precise angular resolution or with limited energy diagnostic capabilities. MaGIXS, by comparison, is the first soft X-ray solar imager to measure specific temperature distributions at different parts of active solar regions, and these analyses will be augmented by the higher energy X-ray photons obtained by NuSTAR.  Together, these precision data will help scientists resolve the debate concerning how – and how often – the corona is superheated.

Shedding new light on coronal heating mechanisms could help researchers better understand and even predict potential solar flares and coronal mass ejections, both of which occur most often in connection with regional spikes in coronal heating. These violent outbursts can interfere with communications satellites and electronic systems, even causing physical drag on satellites as Earth’s atmosphere expands to absorb the added solar energy.