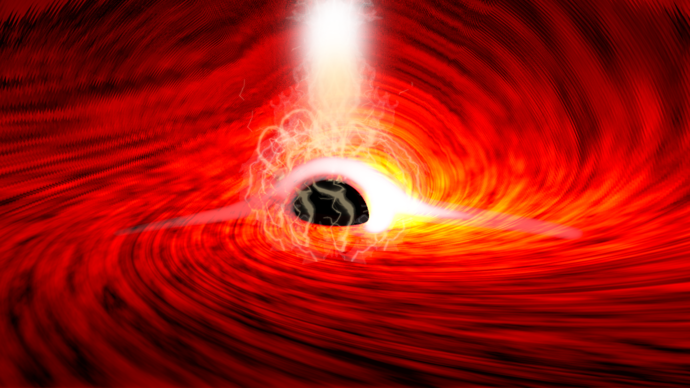 Researchers observed bright flares of X-ray emissions, produced as gas falls into a supermassive black hole. The flares echoed off of the gas falling into the black hole, and as the flares were subsiding, short flashes of X-rays were seen – corresponding to the reflection of the flares from the far side of the disk, bent around the black hole by its strong gravitational field. (Image credit: Dan Wilkins, original caption Taylor Kubota)

Using NASA’s NuSTAR and ESA’s XMM-Newton X-ray observatories, an international team of scientists led by Dan Wilkins of Stanford University observed extremely bright flares of X-ray light coming from around a black hole. The X-ray flares echoed off gas falling into the black hole, and as the flares were subsiding, the telescopes picked up fainter flashes due to echoes of the flares bouncing off gas behind the black hole.

The scientists were monitoring the nearby spiral galaxy I Zwicky 1, which is 800 million light-years from Earth and hosts a supermassive black hole 10 million times as massive as our Sun. NuSTAR was pointed at I Zwicky 1 continuously for 5.3 days in January 2020, with coordinated XMM-Newton observations for 1.7 of those days. The astronomers did not expect to see anything from behind the black hole, since, notoriously, no light can escape from a black hole. However, the extreme gravity of a black hole warps space-time around it, and light echoes of the bright flare bent around the black hole, becoming visible to NuSTAR and XMM-Newton.

“Any light that goes into that black hole doesn’t come out, so we shouldn’t be able to see anything that’s behind the black hole,” said Wilkins. It is another strange characteristic of the black hole, however, that makes this observation possible. “The reason we can see that is because that black hole is warping space, bending light and twisting magnetic fields around itself,” Wilkins explained.

The observations were designed to learn more about the mysterious ‘corona’ of the black hole, an extremely hot, ionized plasma which is the source of the bright X-ray light. Astronomers think that the corona is a result of gas that falls towards the black hole, where it forms a spinning disk around it – similar to water flushing towards a drain.  This disk is heated up to hundreds of thousands of degrees and generates strong magnetic fields that get twisted into knots by the spinning. When the magnetic field gets tied up, it eventually snaps, releasing the energy stored within it, similar, but much more intense than activity that occurs on the surface of the Sun. This heats everything around it and produces the corona of high energy electrons that produce the X-ray light.

The X-ray flare observed from I Zwicky 1 was so bright that some of the X-rays shone down onto the disk of gas falling into the black hole. X-rays that reflected on the gas behind the black hole were bent around the black hole, causing smaller flashes that arrived at the telescopes with a delay of several minutes. These observations match Einstein’s predictions of how gravity bends light around black holes, as described in his theory of General Relativity.

“Fifty years ago, when astrophysicists starting speculating about how the magnetic field might behave close to a black hole, they had no idea that one day we might have the techniques to observe this directly and see Einstein’s general theory of relativity in action,” said co-author Roger Blandford, also of Stanford University.

The echoes of X-rays from the disk have specific ‘colours’ of light and as the X-rays travel around the black hole, their colours change slightly. Because the X-ray echoes have different colours and are seen at different times depending on where they reflected off the disk, the delays and X-ray spectra contain a lot of information about what is happening around a black hole. Astronomers want to use this technique to create a 3D map of the black hole surroundings.