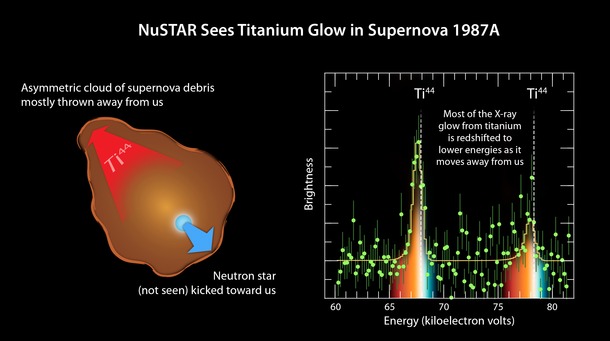 The plot of data from NASA's Nuclear Spectroscopic Telescope Array, or NuSTAR (right), amounts to a "smoking gun" of evidence in the mystery of how massive stars explode. The observations indicate that supernovae belonging to a class called Type II or core-collapse blast apart in a lopsided fashion, with the core of the star hurtling in one direction, and the ejected material mostly expanding the other way (see diagram at left).

NuSTAR made the most precise measurements yet of a radioactive element, called titanium-44, in the supernova remnant called 1987A. NuSTAR sees high-energy X-rays, as shown here in the plot ranging from 60 to more than 80 kiloelectron volts. The spectral signature of titanium-44 is apparent as the two tall peaks. The white line shows where one would expect to see these spectral signatures if the titanium were not moving. The fact that the spectral peaks have shifted to lower energies indicates that the titanium has "redshifted," and is moving way from us. This is similar to what happens to a train's whistle as the train leaves the station. The whistle's sound shifts to lower frequencies.

NuSTAR's detection of redshifted titanium reveals that the bulk of material ejected in the 1987A supernova is flying way from us at a velocity of 1.6 million miles per hour (2.6 million kilometers per hour). Had the explosion been spherical in nature, the titanium would have been seen flying uniformly in all directions. This is proof that this explosion occurred in an asymmetrical fashion.