A Black Hole Destroys a Star 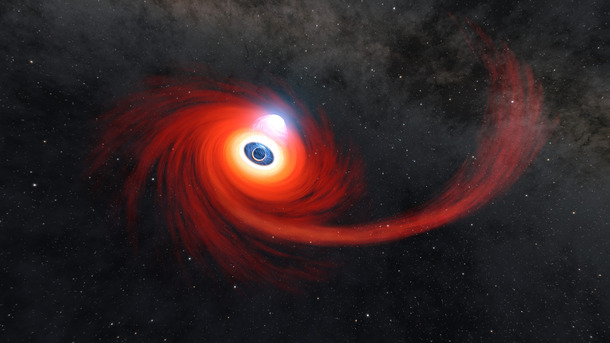 A disk of hot gas swirls around a black hole in this illustration. Some of the gas came from a star that was pulled apart by the black hole, forming the long stream of hot gas on the right, feeding into the disk. These events are formally known as tidal disruption events, or TDEs. It can take just a matter or weeks or months from the destruction of the star to the formation of the disk. The gas gets hotter the closer it gets to the black hole, but the hottest material can be found above the black hole. This hottest material is cloud of plasma (gas atoms with their electrons stripped away) known as a corona.

Most TDEs that result in the formation of a corona also produce jets of material that spew into space away from the black hole at its poles. A TDE called AT2021ehb is the first confirmed example of a corona forming without jets in a tidal disruption event. The observation of AT2021ehb makes it possible for scientists to study the formation of jets and coronae separately.