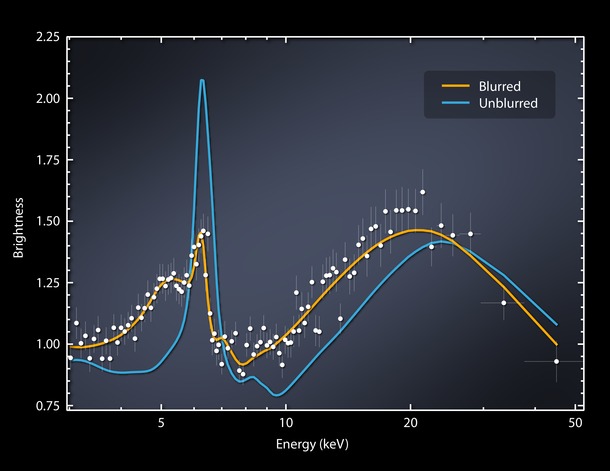 This plot of data captured by NASA's Nuclear Spectroscopic Telescope Array, or NuSTAR, shows X-ray light streaming from regions near a supermassive black hole known as Markarian 335. The light is coming from two areas: a superheated disk of material feeding the black hole, called the accretion disk; and a cloud of particles traveling near the speed of light, called the corona. The exact shape and nature of coronas are not clear, but researchers know that X-ray light from the corona is reflected off the accretion disk.

That reflected light, and the corona's direct light, are mapped in this plot over a range of X-ray energies. (This is the highest range of X-rays, which NuSTAR was specially designed to see.) The yellow line is a model that shows what the data are predicted to look like if X-ray light has been stretched, or blurred. The blue line shows what the plot would look like without the blurring effects. The white dots show the actual NuSTAR data, indicating the light is extremely blurred.

What's blurring the light? It's a combination of factors. First, there is a Doppler shift happening due to the spinning disk. As one side of the disk moves toward us and the other side away, the light is squeezed or stretched. A second effect has to do with the enormous speeds of the spinning black hole, which approach the speed of light. A final effect is from the enormous gravity of the black hole, which pulls on the light, making it harder to escape its grasp. The light loses energy in this process. All of these factors contribute to the smeared look of the data as seen in the plot.

These data were taken after a dramatic dip in brightness had first been observed by NASA's Swift satellite. NuSTAR's high-energy X-ray data pointed to the cause for the observed change: Markarian 335's corona had shifted closer to the black hole itself -- and this closer proximity meant that the black hole's gravity could yank harder on the corona's light, stretching it to lower energies than observed before. The astronomers say that the corona moved over a period of days, and is still in the close configuration. They don't know if and when it would move back to where it was previously, or why the corona moved. NuSTAR and other high-energy telescopes are busy trying to crack these mysteries.

NuSTAR's mission operations center is at UC Berkeley, with ASI providing its equatorial ground station located at Malindi, Kenya. The mission's outreach program is based at Sonoma State University, Rohnert Park, Calif. NASA's Explorer Program is managed by Goddard. JPL is managed by Caltech for NASA.