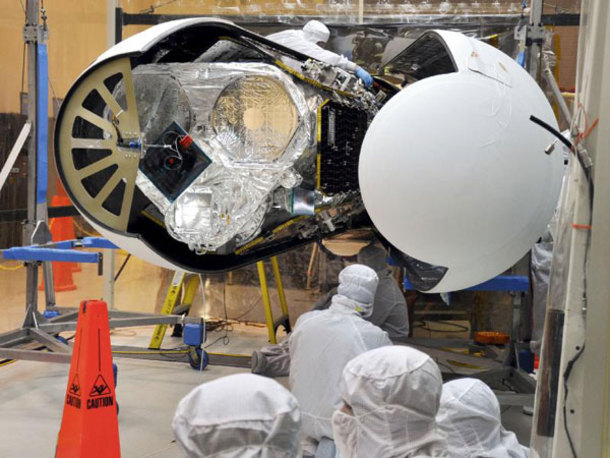 An Orbital Sciences technician completes final checks of NuSTAR, inside the Orbital Sciences processing facility at Vandenberg Air Force Base in California before the Pegasus payload fairing is secured around it. At this stage, NuSTAR was already mated to its Pegasus XL rocket, which is positioned behind the spacecraft outside the environmental enclosure. Encapsulation of NuSTAR in its fairing was a significant pre-launch milestone. The fairing protected the spacecraft from the heat and aerodynamic pressure generated during ascent to orbit.

After processing of the rocket and spacecraft are complete, they were flown on Orbital's L-1011 carrier aircraft from Vandenberg to the Ronald Reagan Ballistic Missile Defense Test Site on the Pacific Oceans Kwajalein Atoll. From there, NuSTAR was sucessfully launched on June 13th, 2012.