Mast Deployment Test on the Ground 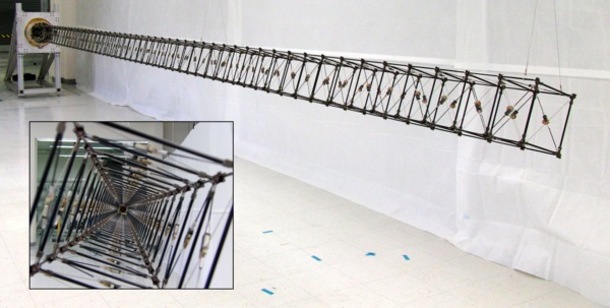 Essential to the NuSTAR design is a deployable mast which extended to 10 meters (30 feet) after launch. This mast separates the NuSTAR X-ray optics from the detectors, a necessity to achieve the long focal length required by the optics design. Using a deployable structure allowed NuSTAR to launch on a Pegasus XL rocket, one of the smaller launch vehicles available. Previous focusing X-ray missions such as Chandra and XMM-Newton launched fully deployed on larger rockets.

This extendable mast was built by ATK Goleta, which specialize in space-based deployable structures. They have built structures that have flown on the International Space Station, on Mars landers, and a mast similar in design albeit much larger in scale that flew on the Space Shuttle Endeavor in February 2000. These images are from a full deployment test at ATK Goleta in August 2009.