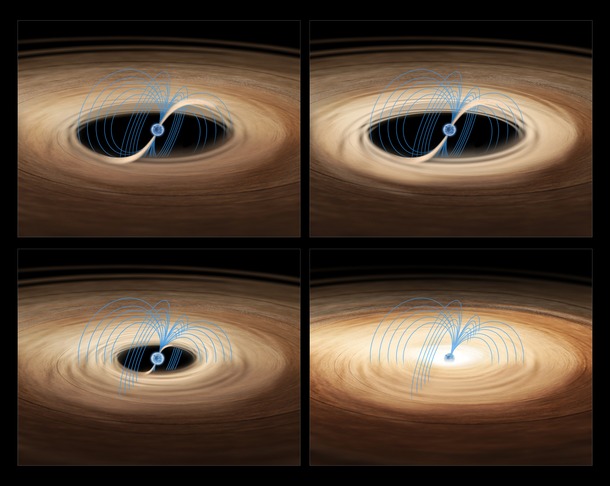 These four images show an artist's impression of gas accreting onto the neutron star in the binary system MXB 1730-335, also known as the "Rapid Burster."

In such a binary system, the gravitational pull of the dense neutron star is stripping gas away from its stellar companion (a low-mass star, not shown in these images). The gas forms an accretion disk and spirals towards the neutron star.

Observations of the Rapid Burster using three X-ray space telescopes -- NASA's NuSTAR and Swift, and ESA's XMM-Newton -- have revealed what happens around the neutron star before and during a so-called "type-II" burst. These bursts are sudden, erratic and extremely intense releases of X-rays that liberate enormous amounts of energy during periods when very little emission occurs otherwise.

Before the burst, the fast-spinning magnetic field of the neutron star keeps the gas flowing from the companion star at bay, preventing it from reaching closer to the neutron star and effectively creating an inner edge at the center of the disk (top left). During this phase, only small amounts of gas leak towards the neutron star.

However, as the gas continues to flow and accumulate near this edge, it spins faster and faster (top right), and eventually catches up with the spinning velocity of the magnetic field (bottom left and right).