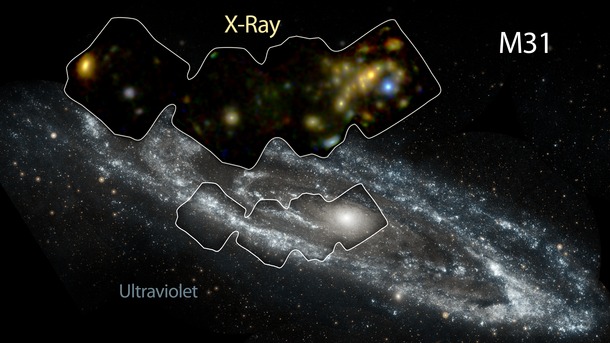 NASA's Nuclear Spectroscope Telescope Array, or NuSTAR, has imaged a swath of the Andromeda galaxy -- the nearest large galaxy to our own Milky Way galaxy.

NuSTAR's view (inset) shows high-energy X-rays coming mostly from X-ray binaries, which are pairs of stars in which one "dead" member feeds off its companion. The dead member of the pair is either a black hole or neutron star. NuSTAR can pick up even the faintest of these objects, providing a better understanding of their population, as a whole, in Andromeda. The findings ultimately help astronomers gather clues about similar objects in the very distant universe.

The background image of Andromeda was taken by NASA's Galaxy Evolution Explorer in ultraviolet light.

Andromeda is a spiral galaxy like our Milky Way but larger in size. It lies 2.5 million light-years away in the Andromeda constellation.