The Anatomy of a Black Hole Flare 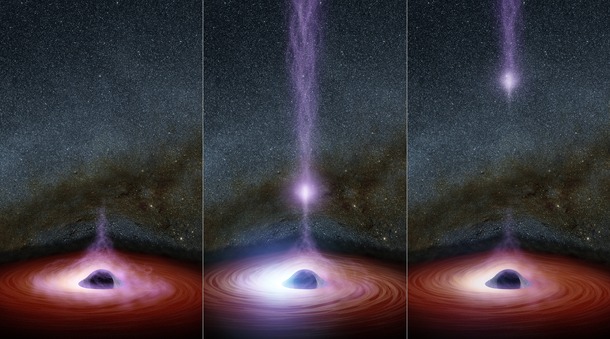 This diagram shows how a shifting feature, called a corona, can create a flare of X-rays around a black hole. The corona (feature represented in purplish colors) gathers inward (left), becoming brighter, before shooting away from the black hole (middle and right). Astronomers don't know why the coronas shift, but they have learned that this process leads to a brightening of X-ray light that can be observed by telescopes.

Normally, before a black hole's corona shifts, there is already an effect at work called relativistic boosting. As X-ray light from the corona reflects off the black hole's surrounding disk of material -- which is traveling near half the speed of light -- the X-ray light becomes brightened, as seen on the left side of the illustration. This boosting occurs on the side of the disk where the material is traveling toward us. The opposite effect, a dimming of the X-ray light, occurs on the other side of the disk moving away from us.

Another form of relativistic boosting happens when the corona shoots away from the black hole, and later collapses. Its X-ray light is also brightened, as the corona travels toward, us leading to X-ray flares.

The immense gravity of the black hole warps the appearance of the disk and stars behind it.

In 2014, NASA's Nuclear Spectroscopic Telescope Array, or NuSTAR, and Swift space telescopes witnessed an X-flare from the supermassive black hole in a distant galaxy called Markarian 335. The observations allowed astronomers to link a shifting corona to an X-ray flare for the first time.