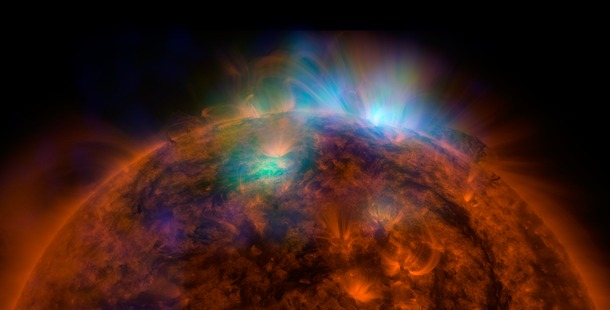 X-rays stream off the sun in this image showing observations from by NASA's Nuclear Spectroscopic Telescope Array, or NuSTAR, overlaid on a picture taken by NASA's Solar Dynamics Observatory (SDO). This is the first picture of the sun taken by NuSTAR. The field of view covers the west limb of the sun.

The red channel represents ultraviolet light captured by SDO at wavelengths of 171 angstroms, and shows the presence of lower-temperature material in the solar atmosphere at 1 million degrees.

This image shows that some of the hotter emission tracked by NuSTAR is coming from different locations in the active regions and the coronal loops than the cooler emission shown in the SDO image.