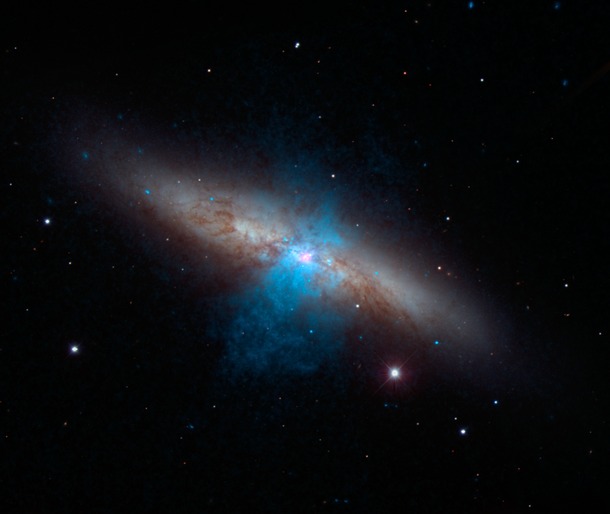 High-energy X-rays streaming from a rare and mighty pulsar (magenta), the brightest found to date, can be seen in this new image combining multi-wavelength data from three telescopes. The bulk of a galaxy called Messier 82 (M82), or the "Cigar galaxy," is seen in visible-light data captured by the National Optical Astronomy Observatory's 2.1-meter telescope at Kitt Peak in Arizona. Starlight is white, and lanes of dust appear brown. Low-energy X-ray data from NASA's Chandra X-ray Observatory are colored blue, and higher-energy X-ray data from NuSTAR are pink.

The magenta object is what's known as an ultraluminous X-ray source, or ULX -- a source of blazing X-rays. Previously, all ULXs were suspected to be massive black holes up to a few hundred times the mass of the sun. But NuSTAR spotted a pulsing of X-rays from this ULX (called M82 X-2) - a telltale sign of a pulsar, not a black hole. A pulsar is a type a neutron star -- a stellar core left over from a supernova explosion -- that sends out rotating beams of high-energy radiation. Scientists were surprised to find the pulsar at the root of the ULX because it shines with a luminosity that is more typical of heftier black holes.

NuSTAR data covers the X-ray energy range of 10 to 40 kiloelectron volts (keV), and Chandra covers the range .1 to 10 keV.