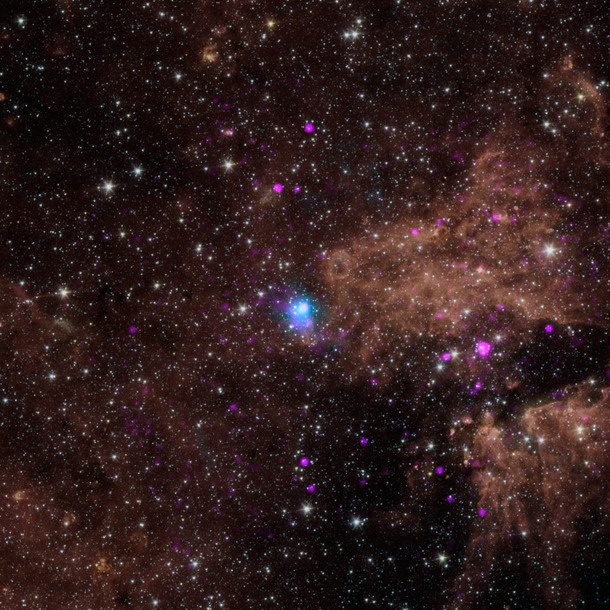 The blue dot in this image marks the spot of an energetic pulsar -- the magnetic, spinning core of star that blew up in a supernova explosion. NASA's Nuclear Spectroscopic Telescope Array, or NuSTAR, discovered the pulsar by identifying its telltale pulse -- a rotating beam of X-rays, that like a cosmic lighthouse, intersects Earth every 0.2 seconds.

The pulsar, called PSR J1640-4631, lies in our inner Milky Way galaxy about 42,000 light-years away. It was originally identified by as an intense source of gamma rays by the High Energy Stereoscopic System (H.E.S.S.) in Namibia. NuSTAR helped pin down the source of the gamma rays to a pulsar.

The other pink dots in this picture show low-energy X-rays detected by NASA's Chandra X-ray Observatory.

In this image, NuSTAR data is blue and shows high-energy X-rays with 3 to 79 kiloelectron volts; Chandra data is pink and shows X-rays with 0.5 to 10 kiloeletron volts.